The beer is the St. Peter’s Golden Ale.

From the website, stpetersbrewery.co.uk, one can find out about the other beers they brew plus find a description of the Golden Ale.

Our Beers are all “real ales” and are brewed using the finest ingredients – local East Anglian malts and British hops.  Our water is drawn from our own deep source withing the chalk layer way below St. Peter’s Hall and is ideal for brewing.

English Pale malts coupled with Challenger and Goldings hops provide the bitterness and aroma.  The result is a highly distinctive light, golden ale…. 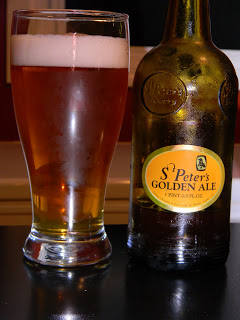 The appearance was of a clear, dark yellow/gold color with some brighter yellow highlights around the bottom and sides of the glass.  A bright white, soapy head with a plethora of fine bubbles blanket the body.  It was of nice size, although the retention time was mostly average, but did present some nice patchy lacing as it went down.

A fresh grass/grainy bouquet of hops were present with the first sniff.  Clean.  After a moment, I started to detect a few hints of churned butter and dry cracker.  A slight fruitiness of which smelled like green apple.  The apple was not a forerunner in the fragrance, but held on tight to be mindful of it’s presence.  It’s nicely balanced and pleasant.

The taste brought out more of the grain.  It’s not an astringent grain, as some can be, but rather subtle and delicate.  Again, like the smell, I’m picking out some butter notes and a cracker crispness.  More of the apple, however I also hit on a very small splash of lemon.  Nice.  Only mild touches of bitterness came forth to add a bit more complexity and to round out the overall, well balanced flavor.

A medium mouthfeel that was crisp, snappy, refreshing and dry.  The palate is not drenched with flavor, but for me, it doesn’t need to be with this style of brew.  Rather a nice, little zip to keep me occupied until the next sip.

I’ll be honest.  I didn’t quite know what to expect with this brew when I opened it.  However, I was pleasantly surprised.  It’s a very nice and well rounded beer.  It’s very sessionable and easy to drink.  A great beer to sit back and relax with.  For a low ABV drink, I did find it to be somewhat filling, but I could still manage to have a couple during a sitting.  I would be interested in trying a few more St. Peter’s beers.  It seems that they make a very solid product.

Have you tried St. Peter’s Golden Ale?  If so, what are some others that I should look forward to trying?