25 Apr
Tonight’s review is of a chocolate stout from the Fort Collins Brewery located in Fort Collins, Colorado.

This will be my first beer from this brewery.  I went to their website, fortcollinbrewery.com, and found that they have a nice selection to choose from.

First, a brewers description of the Chocolate Stout.

Smooth, Creamy, Irresistible.  A velvety smooth mouthfeel and impeccable flavor make this stout positively seductive as the medium body of the brew leaves you wishing your glass was bottomless.  Subtle hop bitterness rounds out the character of roasted barley and chocolate malt in this proven classic. 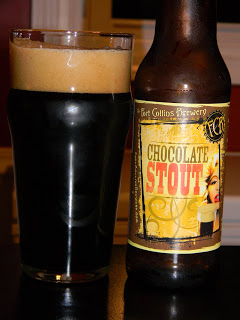 It poured a nice dark brown/black color with some faint ruby/red highlights around the bottom and sides.  The head was a tan color of well-to-do size and presentable retention.  The head was not as creamy as I thought it might be and, in all actuality, it was kind of soapy looking.  I found that to be a bit odd coming from a stout.  Either way, it left some pretty nice patches of lacing along the edges as I sipped.

The smell was rather sharp and robust notes of a burnt or roasted coffee.  Some chocolate is in there, but it’s not very prevalent.  It seems to be an afterthought really, even though this is considered to be a “chocolate” stout.  As I perused the fragrance a bit more, I found a surprising “red bean” type of aroma.  Almost like what you would find from red beans and rice.  Hmm… that’s different.

The taste provided a pronounced coffee stab coinciding with the aforementioned “red bean” flavor that, truth be told, was kind of interesting.  The chocolate seemed to be pushed even further in the background, with the taste, than it was in the smell.  Small amounts of bitterness caress the tongue to add some character.  The tone of flavor did not seem to be very well balanced to me.  I thought it could have been better.

The mouthfeel was a medium mouthfeel that actually leaned a touch toward the thin side.  It was smooth and left a scant amount of essence behind, but as the beer warmed it started to get a tad watery.

I had hoped this beer was going to be really good.  It wasn’t horrible by any means, although it paled in comparison to some of the other Stouts that I’ve had.  It was drinkable and I could have another no problem, but I found that this example was not utterly balanced as well or quite as robust in character as I prefer from this style.  It almost presented itself as more of a “coffee” stout, in my opinion.  With that being said, you may find it quite good. Pick it up and give it a try and let me know what you think of it.

As always, thanks for reading and please leave a comment if you have any questions or critiques.