13 May
Today’s review is from a fairly popular craft brewer, located in the northern Ohio town of Cleveland, called the Great Lakes Brewing Company.

They are well respected throughout the beer scene and make a variety of exceptional brews.  The beer I chose for this review is a seasonal called the Conway’s Irish Ale.  I sampled this beer around St. Patrick’s Day, so I could uphold the Irish theme for which I think it was intended.

An homage to Patrick Conway, grandfather of co-owners Patrick and Daniel and a Cleveland policeman who directed traffic near the Brewery for 25 years.

How ’bout we get right to it? 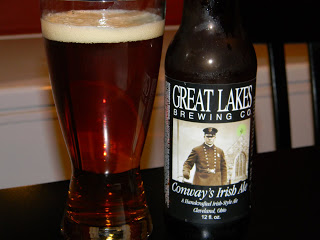 With the color, it does typify a traditional Irish Red.  The appearance was a very clear reddish/amber color with some burnt orange highlights around the bottom and sides of the glass.  An off white head stood on top for a minute, but it was not extremely large nor did it have a very long retention time.  The lacing was just ok for me.  I, personally, would have liked to see a little bit more.

In the aroma, I detected a sweet note of some type of ripe fruit.  I found it to smell similar to fresh cranberry juice.  It almost has that “Christmas” spice nose that accompanies so many winter seasonals.  I also picked out some toasty, bready malt to go along with discriminate caramel undertones.  As I wandered around the bouquet a bit more, I started to detect an earthy type of note that reminded me of fresh “corn silage.”  That seemed a bit out of place really.  It wasn’t off putting mind you, but I just wasn’t expecting it I guess.  Overall, the balance was good and didn’t do anything to not make me want to take that first sip.

With the taste, I was happy to find more of the toasty breadiness and malt.  The sweetness from the cranberry and caramel was a little less profound and only tickled the tongue in a tenuous way.  One flavor that was hidden in the smell, but came through in the taste, was a sugary toffee that I think gave this brew a needed “push” to round out the flavor profile.  Some spices were present, although they were light and mostly indirect.  A slight tinge of hop bitterness finished it off.

The mouthfeel was medium, dry and smooth.  It was nicely crisp and left only an average amount of flavor on the palate, however it did leave a bit of an alcohol warmth behind to catch my attention.

Irish Red’s are a funny style to me.  One day I think they are great.  The next, not so much.  I really have to be in the mood for them.  I will say that I really like that deep reddish/amber color that they posses and on occasion I will get a craving for one, but as soon as I start drinking, I’m always left wanting a bit more.  Maybe it’s just not my style.  This beer was just ok for me.  It’s not bad at all, seemed fairly easy to drink and put me in the mood for some St. Patrick’s Day fun.  Overall, this brew is well made and mostly solid.  If you favor Red’s and see a single sitting on the shelf, give it a shot.

Thanks again, guys.  I really appreciate all the readers out there.  Thanks for commenting and thanks for all the positive feedback.

Posted by Beer Apprentice on May 13, 2011 in Country: USA, Great Lakes