I have never had this brew before, so I’m interested to see if it holds up to the other Fuller’s that I have tried.

The website, fullers.co.uk, has a nice, little description about the beer.

Organic Honey Dew is the UK’s best selling organic beer.  Light and golden with a zesty edge and a bitter-sweet flavour, Honey Dew is a naturally palatable brew that is Soil Association approved.

Served chilled, Organic Honey Dew offers both refreshment and an unbeatable taste.  The real organic honey in the brew gives a gentle sweetness that appeals to a wide range of people, even those who perhaps wouldn’t usually drink beer, making it a very popular choice!

I love the taste of honey by itself, but I have only had one other beer brewed with honey and it was a Porter, so let’s see how this one tastes. 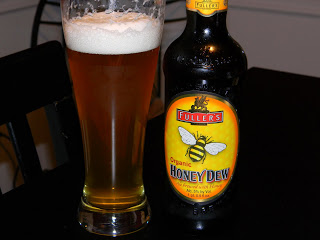 The appearance on the Honey Dew didn’t look bad at all.  It was a hazy, “dull” yellow color that did sort of look like light honey.  With a medium pour, a very thick, soapy, bright white head was produced that had some real nice retention with some decent lacing left behind.  Even through the haze, I could see quite a few bubbles racing to the top from the bottom.

As I raised the glass and took a whiff, I DID detect a sweet fragrance of honey.  I was also greeted by some spices similar to coriander, which brought forth a character very reminiscent to a “Wit” or a “Kolsch.”  A touch of lemon citrus with a faint hint of floral hops tickled my nostrils also.  The overall fragrance was a bit relaxed except for the honey.  I found that it got stronger and stronger as the beer warmed and as I worked my way down the glass.  That could be a turn off for some because it did seem very sweet and dominant.

The honey was in the taste also, but it didn’t seem to be as pronounced as it was in the aroma.  Some bitterness is there, from the hops of course, along with the spice that I found in the nose (coriander).  Grain hints were stumbled upon in the flavor, of which I did not find in the aroma.  The lemon citrus brings up the rear to add a little kick to the overall complexity.  The flavor was balanced a wee bit better than the smell in my opinion.

The mouthfeel was light, crisp, refreshing and smooth.  It was somewhat watery, however it’s suitably thirst quenching and a little bit of flavor was left on the palate for me to enjoy.

To me, this brew was just “ok.”  It was nothing horrible by any means and, in all actuality, it was a welcome change from the standard Summer refreshers.  The honey did seem to get a bit sweet as I drank and it became somewhat overwhelming, but I could still enjoy this for a pint or two.  This would be worth a try, just for the experience, if you have never had a beer brewed with honey.  Pick up a bottle or two and give it a go and see how you find it.  Be sure to let me know in the comments.

Thanks for reading guys.  I, truly, appreciate it.

Posted by Beer Apprentice on June 3, 2011 in Country: England, Fullers