I don’t know much about this brewery and I can’t say that I’ve ever had a brew of theirs, so let’s see what the website (brasserielefebvre.be) has to say about it.

The natural spice aromas of coriander and bitter orange peels are added during the brewing process.  The brewing method, which includes infusion, is very slow.  The beer, which is not filtered, is bottled and refermented with yeast and brewing sugar.  You need only take a sip of this delicious drink to appreciate the fresh and mellow flavour with its hint of orange.  It is really not like any other beer. 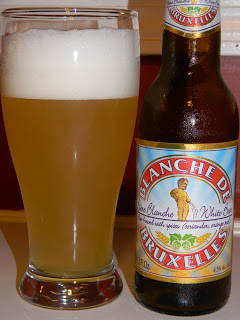 It poured a hazy, yellow/pineapple juice color with a bright, white, fluffy, soapy head.  Very nice size, but it only had moderate retention and lacing.  Some extremely light yellow highlights adorned the bottom of the glass.  It definitely looked like a Wit beer.

The smell revealed a spicy coriander with both orange and lemon citrus accents.  A controlled wheat note was present along with a slight “beer” aroma.  In some ways, it smelled like a sweet tart.  Overall, it was well balanced, but conservative.

The taste had both the orange and lemon citrus combined with touches of sourness and bitterness.  A very peppery spice along with the coriander was mixed with wheat and a yeasty, grain”y” bill.   Again, decently well balanced, however it was controlled and low-key.

The mouthfeel was medium/light to mostly light.  It was smooth, crisp, thirst quenching and refreshing.  A bit of a watery mouthfeel that didn’t leave much, by way of flavor, on the palate.

To me, this brew didn’t have a whole lot to it.  Sort of middle of the road as far as aroma and flavor go.  It’s super easy to drink and it would be no problem to set several of these back during the warmer days of Spring and Summer, however I didn’t find it to be anything too complicated.  Mostly straight forward.  If you favor Wheat/Wit beers, pop a cold one and give it a try.  It may suit your needs perfectly.  I would have no problem drinking it again if it was offered, but I may not go out of my way to find it however.  I will say that I love the label.  Haha.

Thanks for reading everybody!!!  I hope everyone has a great weekend.  Cheers!!!!

Posted by Beer Apprentice on June 17, 2011 in Country: Belgium, Lefebvre