28 Jun
Today’s review is of a collaboration brew produced by both the Brasserie St. Feuillien Brewery located in Le Roeulx, Belgium and the Green Flash Brewing Company situated in San Diego, California.

It’s called the Biere De L’Amitie and is categorized as a Belgian Strong Ale.

Neither website, st-feuillien.com nor greenflashbrew.com had any information regarding this particular beer, so I had to look on ratebeer.com to find the commercial description. 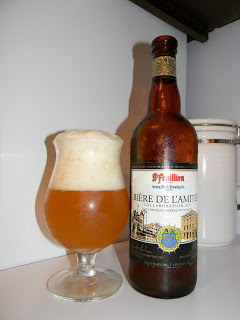 This beer poured a very cloudy, yellow/gold color with a HUGE, soapy, bubbly, white to barely off white head.  The cap had outstanding retention and thick “cobweb” lacing sticking to the sides of the tulip glass.  As I swirled the brew, I noticed that the head became a bit more creamy looking and held to a thin layer of film on top of the liquid.  This beer looked good to me!!!

The smell brought out a very sweet, fresh and sour fruit citrus.  Mostly along the lines of lemon with lime splashes.  Peppery spices came forth in an established way and added a zing along with a definite Belgian grain/yeast profile.  Only the most faint alcohol hint is detected.  Earthy hop fragrances finished off the nose and completed a rather complex aroma.

The taste started with bursts of a lemony sourness on the tongue followed by a yeast/grain contour.  I found that the alcohol tones were more noticeable in the taste.  A bitter hop bite came on strong, but settled to a light, little tingle on the swallow.  As the beer started to warm a bit, the flavor changed slightly and added flavors of green banana along with crisp breads and sour dough.  Although sour dough was found, the overall “sourness” from the lemon actually diminished somewhat.  One final discovery was that of a dental fluoride type of zing.  I don’t know for sure…. it could have just been me.  The flavor seemed to be balanced ok, with lots going on, but the sourness took a little while for me to get used to.

The mouthfeel was medium, somewhat sharp, crisp and refreshing.  It was considerably dry with a very nice burn at the back end.  Plenty of flavor was left behind, after the swallow, for contemplation.

I could tell that this beer was well made and thought out, however it was just “good” to me.  I think the reason being is that I don’t have a lot of experience with this style of beer, so I don’t really have much to compare it to.  I found that it took me a few sips to really adjust and get into it.  That being said, after I did get going, I thought it to be pleasant, very good and enjoyable.  It seemed to become more malty as it warmed, which helped to take some of the “edge” off.  Even with the high ABV I could see myself having this during the Spring and Summer and being quite satisfied.  It was nicely refreshing and fairly easy to drink.

Did any of you guys have the opportunity to try this when it came out?

Please leave a comment if you wish and tell me about it.