19 Sep
For today’s craft beer review I thought I would try my hand at another brew from the Unibroue Brewery called Trois Pistoles.  This brewery is located in Chambly, Quebec, Cananda.

I have been somewhat mixed in my opinion of Unibroue, but there is no doubt that they are a well respected brewer in the craft beer world.

The website, unibroue.com, has this description regarding the legend of Trois Pistoles.

Trois Pistoles (Three Coins) is named after a small village of Quebec.  Founded over 300 years ago, Trois Pistoles gave birth to several legends, including one about the Black Horse.  It involved a local bishop who conjured up a good devil (appearing in the form of a bridled black steed) to haul large brick stones to construct a new church.  When someone accidentally removed the bridle, the black horse suddenly vanished just as the last remaining stone was to be set.  This stone is still missing, as can be seen when visiting the local church.

Let’s get it in a glass. 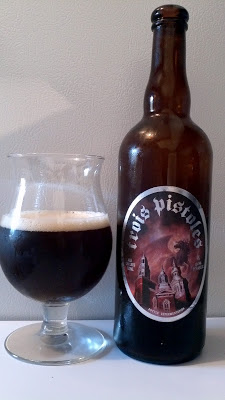 The appearance of this beer was pretty nice.  It was a dark brown color with only the slightest ruby and purple tinted highlights.  A light tan head was formed from a medium pour that had ok size, decent retention and fairly good lacing.  The head was creamy, mostly smooth and soft in texture.

The nose had a wonderful waft of dark fruits and Belgian yeast.  The fruits were reminiscent of dried raisins, figs and dark cherries.  I found a very noticeable spiciness to the aroma along with some of that “barnyard funk.”  Some alcohol notes were noticed, although they were never overpowering or distracting.  After the brew warmed considerably, I began to notice a few underlying chocolate notes.  Overall, the aroma was very well balanced and complex.

The taste was outstanding.  Wonderful spices, dark fruits of cherries, raisins and figs, bready malts and earthy hops were all noticed.  It was very rich and a little bit tangy.  The bitterness was somewhat relaxed and the sourness was kept to a minimum.  A slight chocolate savor gave the taste a “sugary” profile that I found to be very appealing.  The alcohol was pronounced, but totally melded with the overall flavor profile.  The taste was bold, complex and harmonized very well.

The mouthfeel was a strong medium.  Very dry, mostly smooth and quite crisp actually.  It left a wash of flavors behind on the palate.  A touch of warmth was felt, however not near as much as I thought it would have considering the 9.0% ABV.  It was still very nice though.

Well, I don’t know why I have never tried this brew before.  I have always just sort of glanced over it when beer shopping.  It’s a wonderful beer and very flavorful.  Very complex in both the aroma and the taste.  It’s relatively easy to drink for being such a “big” beer too.  I think the Trois Pistoles would be perfect for a lazy Fall or Winter afternoon.  I don’t think that I will be passing this one up again and I would recommend that you give it a try if you see it also.  Be sure to let me know what you thought of it too.

Thanks for reading and commenting everyone.  Have a great day!!!

Posted by Beer Apprentice on September 19, 2011 in Country: Canada, Unibroue