22 Sep
Today, I thought I would sample another brew from the Dogfish Head Brewery, which is located in Milton, Delaware.  How about we try the Squall IPA?

I had never even heard of this brew until I saw a bottle sitting on the shelf.  I don’t know much about it or how people perceive it, so I’m really eager to see what it’s all about.

The website, dogfish.com, didn’t provide any information on the Squall IPA, although I was able to obtain the commercial description from ratebeer.com.

An unfiltered, 100% bottle-conditioned, super-pungent imperial I.P.A. clocking in at 9% ABV and dry-hopped with Palisade, Amarillo, Simcoe, Cascade, CTZ, and Willamette hops.  The beer will come out in June of 2009 in a handful of eastern seaboard states.  It will only be packaged in 750 ml champagne bottles.  Seek it out… and hoard it from the non-believers.

I’m ready for this thing!!! 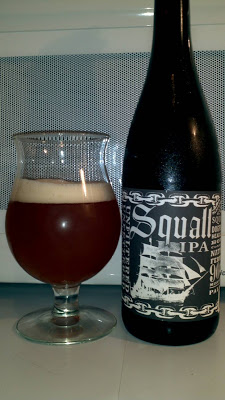 The beer poured a hazy, dark orange color.  A nice, tight, mostly creamy, egg shell colored head was formed from an easy pour.  It was decently well sized with pretty good retention.  The lacing looked real nice also.  Once it settled it left a thick ring around the top plus when aggressively swirled, a nice patch of foam was continuously formed.

The aroma had a very nice mixture of grapefruit, orange, peach and pineapple citrus.  It also provided some “earthy” notes with well blended caramel malts and toasted biscuits.  A very light distinction of alcohol was obtained in the nose too.  This aroma seemed very similar to an American Barleywine with only slightly less malt.  The fragrances were not overpowering, however all were blended and balanced very well.

The flavor brings the malt to the forefront.  The hops are noticed, but they are not near as pungent as they were in the aroma.  Flavors of very sweet, sugary caramel malts were mixed with toasted breads and/or biscuits.  More of the “earthiness” was noticed again, which helped created a very “round” profile.  The citrus was definitely found (mostly grapefruit and orange slices), however they were very laid back.  It still had plenty of bite and bitterness, but the malt is the star of the show with this one.  Some very satisfying alcohol tones were witnessed underneath to create an even more complex taste than what was initially thought.

The mouthfeel was a very strong medium.  It was very dry with a wonderful alcohol warmth.  It’s almost chewy.  It’s not quite the smoothest beer I’ve ever had, although it’s not really sharp either.  It sits right in the middle.  The palate is left with heavy doses of flavor, so as to let me wait a few moments between each sip.

Wow!!!  This is a really good beer.  I would say this is closer kin to an American Barleywine than a Double IPA.  It could have just been the way I interpreted it however.  It’s a relatively easy drink for 9.0%.  One bottle would be all I would need I think.  If you can find it, give it a shot.  I don’t think that you will be disappointed.  It has a super aroma, flavor and mouthfeel.  Don’t expect a “hop bomb” mind you, but rather a very good, malt forward DIPA.

Thanks for reading and commenting everyone.  I hope you all are having a great day out there in craft beer land.