06 Oct
Today, I have a very special beer to review for you.  It’s one that I’ve had in my possession for a while and one that I’ve been looking forward to trying.  It’s the Stone Belgo Anise Imperial Russian Stout produced by the Stone Brewing Company located in Escondido, California.

I have always enjoyed the “standard” Imperial Russian Stout from Stone, so I’m hoping that this beer follows the same line as that classic with just a few subtle twists along the way.

This 2011 Odd Year release pours pitch black with a deep tan head, with aromatic notes of anise, coffee and cocoa jumping from the glass.  Coffee and dark roasted malt flavors dominate, with robust complements of anise and oak, which leave a lingering blend of vanilla, licorice, and dark malt on the palate.  This one will age nicely for several years.

I think this one needs to be poured into a snifter, don’t you? 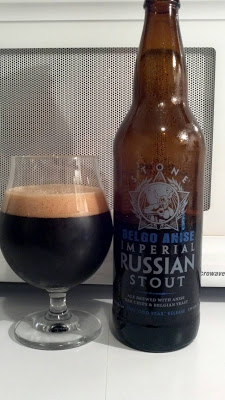 This thing poured black as coal with absolutely no highlights showing through at all.  A very well sized, dark tan head was produced from a relatively easy pour.  The crown was smooth, soft, thick and creamy.  It had a real nice retention time with thick, clingy lacing being left behind when it finally did decided to settle to a skim on top.  When tilted from side to side, the beer left some alcohol “feet” behind as well as some of that aforementioned lacing.  It looked great I must say.

The aroma brought forth some wonderful “oak” notes juxtaposed by significant amounts of anise.  It smelled very roasted and charred, which seemed to completely mask any sort of alcohol that may have come forth in the nose.  I also picked up on a fragrance of “special dark” chocolate combined with burnt coffee grounds.  Some of the Belgian yeast was noticed, although it was not nearly as much as I was anticipating.  The bouquet was very robust and stout, but it did smell pretty good.

The taste had a very deep roasted and burnt tone with copious amounts of anise.  More flavors of “oak” with heavy tinges of black licorice.  Dried black coffee granules with more of the dark chocolate and hints of “smoke” continued the heavy malt theme of this beer.  The Belgian yeast was, again, not quite as prominent as I thought it should be.  This brew has an IBU rating of 52, yet not a lot of bitterness to speak of.  Toward the back end I started to discern some type of burnt rubber taste that began to be somewhat distracting and displeasing as I went along.  There is a lot going on here however.  Very rich, robust, bold and complex.

The mouthfeel was full, thick, chewy and mostly smooth.  It had the standard amount of warmth that one might expect from a beer with a 10.5% ABV.  The palate was completely drenched with that burnt rubber aftertaste long after the sip was gone.

Man!!!  This is one rich, robust, bold and complex son of a gun.  It’s a sipper for sure.  I probably should have split this with a friend.  It’s a pretty good beer, but it’s terribly difficult to drink.  I sipped on it for nearly 2 hours.  With so much going on, my palate started to become confused and fatigued.  This beer is quite satisfactory in its own right, however it’s not for everyday enjoyment or for the timid.  I, personally, like the “standard” Imperial Russian Stout better.  I have one more bottle of the Stone Belgo Anise that I’m going to hold onto for a few more years and see if it quiets and settles down some.  I’m hoping that the anise relaxes a bit.  I would love to do a side by side with a fresh bottle and one with a few years on it.  I typically like Stones efforts, but this beer just didn’t measure up to some of their other brews.  The appearance and aroma were just fine, but the taste was a little much.  With that being said, pick up a bottle, give it a try and see what you think of it.

Thanks for taking the time to read a few reviews.  I greatly appreciate it.  Until next time.

Posted by Beer Apprentice on October 6, 2011 in Country: USA, Stone