I haven’t had a Sour Ale in a long time, so I’m really looking forward to getting this in a glass and giving it a test drive.

Before we do though, let’s see if we can find a description of this beer from the website, vansteenberge.com.  Well, I couldn’t find anything there, so let’s look on ratebeer.com.

We blend young and old beers to make this mildly tart sour ale.  Light bodied with a lactic/sour nose and a bit of sweet and sour in the finish.  Very refreshing.

Into the glass it goes. 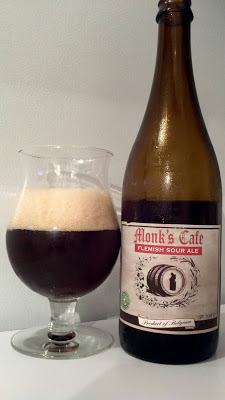 The beer poured a very deep ruby red/burgundy/purple color.  An enormous light tan head was formed from a relatively easy pour.  It looked kind of soapy, rocky and soft, but the retention was pretty good and the lacing was “so-so.”  After the brew warmed and the chill haze diminished I could tell that the beer was fairly clear.

The aroma started with a medium dose of sourness.  A little bit of funk came forth along with some fresh, ripe cherries and sour grapes.  At first, I didn’t find much of a vinegar note, which always seems to accompany Sour Ales, however after the brew had been sitting for a few minutes it began to get more exposed.  I thought this brew smelled nice and tart.  Not overly pungent or astringent, but just an all around good, solid aroma.

The taste let the cherries step out a bit more.  They were very sugary, sweet and pleasant.  Additional ripe grapes made the sourness significantly more poignant.  It was not so much to make it undrinkable or off putting, but rather just to remind me that this is a “Sour” Ale.  It really started to favor a red wine profile the longer I sipped.  I didn’t think the tarty aspect nor the vinegar was very forthcoming either.  Finally, a little bit of oakiness sat in the background to add further complexity to this very nice taste.  I liked it.

The mouthfeel was medium to thin.  It began sharp, but smoothed out ever so delicately the longer I sipped and let the palate adjust.  The beer had good carbonation and finished clean and dry.  Also, it left a good dose of flavor on the palate after the swallow.

Overall, I thought this was a pretty good brew.  It’s very enjoyable and has a relatively high drinkability factor due to the low ABV.  It’s not quite as robust or gargantuan as some Sours can be, but it still represents the style well.  I think it’s worth a try and would be a good one to pick up if you are interested in exploring the wonderful world of Sours.  I liked it and would have no trouble drinking it again if it was offered.  Be sure to let me know what you thought of the Monk’s Cafe Flemish Sour Ale if you’ve sampled it.  I would love to hear a few opinions.

Thanks everyone.  I really appreciate you taking the time to read my beer reviews.