23 Nov
For today’s craft beer review I’m going to be trying a beer from Lasko, Slovenia.  It’s called the Lasko Club Export and it is brewed by Pivovarna Lasko.

I can’t say that I’ve ever tried a beer from Slovenia before, so this could be rather interesting.

The website, http://www.pivo-lasko.si/, had this little tidbit to say about it.

Laško Club is a pale beer with specific sweet character and mild bitterness, made of top domestic and foreign recognised sorts of hop. Due to longer fermentation periods, minimal use of non-sugared types of wheat and higher percentage of malt, it is classified as a premium beer.     It has rich taste and is adequate for special occasions: dinner with friends, business meetings… or a party with friends in your favourite pub. We are proud to call it: Our best!
Let’s drink up!!! 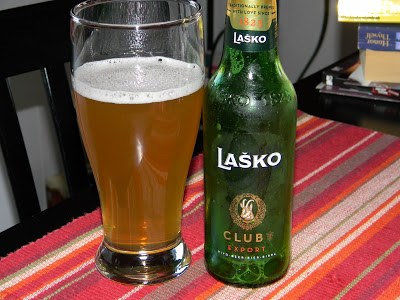 This beer came in an 11.2 oz. bottle and it had an ABV of 4.9%.
It poured a relatively hazy, light orange to lemon color with some sediment floating around inside.  It had a bright white head that consisted of some very large bubbles.  It was mostly soapy in appearance.  It stuck around for a minute, but overall it wasn’t very large nor did it leave a tremendous amount of lacing behind.
The aroma presented a grainy note mixed with hints of grassy hops.  Somewhat of a fresh hay smell was accompanied by a “corn silage” type of fragrance.  Lightly sweet smelling with a hint of wafers.  Not much going on here really.  It’s seemed to be very mild and timid on the nose.
The taste revealed more of the graininess with a slight grassy hop bite and bitterness.  A very small amount of lemon citrus was noticed, which gave it a somewhat sweet and funky undertone.  A little bit more of the “hay” bouquet, however the taste didn’t seem as fresh as the smell.  It tasted a bit musty to tell the truth.  Some cracker type tones were found, but overall, the taste seemed a bit meek and feeble.
The mouthfeel was medium to thin, crisp, smooth, refreshing and thirst quenching.  It was mostly watery and it didn’t cover the palate extremely well.
Hmm.  Well, my first beer from Slovenia didn’t quite knock my socks off.  It wasn’t undrinkable or anything and I don’t think I would have a problem drinking this during the warmer months of the year, however I don’t know that this would be a beer that I would seek out if I was looking for a great Summer beer.  With that being said, it was relatively easy to drink and I’m better off having tried it, but I may pass on this next time.  I mean, if someone is offering this to you, give it a try, but don’t expect a world class beer.
Thanks for reading and commenting everyone.  I really appreciate it.  Until next time.
Cheers.
Score:  3.0 out of 5
Grade:  C
Advertisement

Posted by Beer Apprentice on November 23, 2011 in Country: Slovenia, Lasko