Like most, I have had the opportunity to try several of the products that Dogfish Head produces, however, for some reason I have always passed on the Raison D’etre and have never bothered to give it a taste.  Well, I picked up a bottle the other day and thought I would give it a review.

Let’s see what the website, dogfish.com, has to say about this brew.

Nice and to the point. 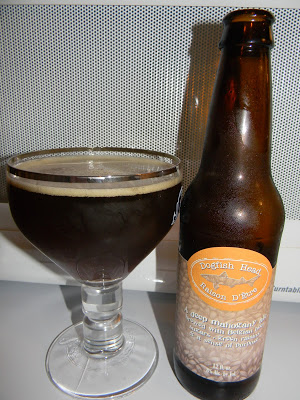 The brew poured a clear, deep brown to burgundy color with some ruby highlights at the bottom of the glass.  The head was off white in color, very fizzy and very soapy.  It dissipated unbelievably quick.  I have never seen that from a Dogfish Head beer before.  Absolutely no lacing was left behind either.  It did leave some alcohol “legs” behind when lightly swirled however.

The nose consisted of a decent amount of raisins of course.  Other dark fruits seemed subtle, but were duly noted.  Hints of wheat bread and powerful aromas of grain and caramel malt.  A light evidence of alcohol.  In a lot of ways this reminded me of a larger, more glorified Marzen styled beer.  I wish it would have had more “oomph” in the dark fruit department.

The taste was a little more forceful when it came to the dark fruits.  Raisins, figs and plums meshed well together to create a nice, fruity, semi-sweet taste.  Continued hints of grain and dark breads, but much more harmonized I thought.  As the brew warmed though, they began to take over the profile and characteristics of the beer.  Hmm.  It had quite a sugary, caramel”y” tinge with a splash of alcohol too.

The mouthfeel was medium bodied, smooth and lightly chewy.  It was significantly dry also.  It left a little bit of an alcohol burn and warmth behind along with a decent sampling of flavor after the swallow.

Well.  Let’s just say that I have enjoyed other Belgian Strong Ales much more than I did this one.  I’m not saying that the beer was horrible or undrinkable or should be passed up, but I was expecting quite a bit more out of this brew than what I got.  See, this is why I’m always a little perplexed when it comes to Dogfish Head.  Some brews completely blow me away and others seem like they are just thrown together haphazardly for the sake of churning out a product.  I don’t know…. maybe it’s just me.  Who am I to question Dogfish Head?!?!  I completely respect and admire them for what they do and will continue to support the brewery, but I was not overly impressed with this beer.  After I finished the bottle…. I didn’t want another one.  With that being said, this may be the beer for you.  Pick up a bottle, give it a go and let me know what you thought of it.

Thanks for reading and commenting everyone.  I really appreciate it.  Until next time.