I have heard many great things regarding the Southern Tier Brewing Company, however I have never had the opportunity to try anything from them, so I’m really excited about this beer.

Let’s find some information about this brew from the website, southerntierbrewing.com.

Three thousand feet above sea level in the misty mountains of Jamaica, some of the world’s finest Arabica beans are hand picked on their way to becoming Blue Mountain Coffee. Halfway around the world, plump spring barley grows to maturity in the loamy soil of North America while aromatic hops are cultivated to exacting standards. Here in our kettles, these three special ingredients are blended to create a heady mixture of sweet sugar, dark roast, and complex flavor. Please enjoy this brew in moderation.

I’m ready for this thing.  How ’bout you guys? 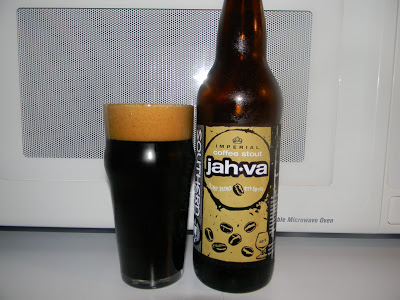 The Southern Tier Jah*va poured a very, very, very dark brown to black color.  Only a thin line of ruby was seen at the very bottom of the glass when held toward the light.  The cap was khaki colored, very creamy, soft and smooth looking.  It was wonderfully sized, had a very nice retention time and left behind some good lacing initially.  The head settled to a fine film on top, but after the brew warmed a bit it was hard to regenerate any foam when aggressively swirled.  Oh well, it still looked rather nice.

The aroma consisted of some heavily roasted malts along with rich espresso and coffee beans.  Hints of toasted grains were combined with a rich and sweet syrupy smell.  Further connotations of bittersweet chocolate intermingled with an earthy walnut all wrapped up in an alcohol cocoon.  This aroma was complex and bold to be completely honest.

The taste was of a sugary, syrupy molasses blended with roasted coffee and espresso.  The chocolate was noticed again in addition to burnt toast, bread and toasted grains that seemed as if they had all had been dipped in alcohol.  It was quite sweet in the taste to tell the truth.  It had a touch of bitterness and it was rich, big, bold and very complex.  With everything that was going on with the flavor it somehow managed to stay balanced and harmonized very well.

The mouthfeel was very full and chewy.  It was very creamy, thick, smooth, dry and velvety.  Tons of flavor, warmth and burn were left on the palate after only one sip.  This was a “world-class” mouthfeel in my opinion.

Overall, this was a tremendous brew.  If you think you would favor a Coffee Stout mixed with a sugary sweetness from chocolate and syrup, then this might be the beer for you.  It is very high in ABV, so the drinkability was not all that great and I noticed that as I worked my way down the bottle it became increasingly more sweet.  I, personally, don’t like this as well as the Founders Breakfast Stout, but it’s still an awesome beer that shouldn’t be passed up.  It fit perfectly well with the cold night on which I drank it.  So, give the Southern Tier Jah*va Imperial Coffee Stout a try and let me know what you thought of it.

My first experience with the Southern Tier Brewing Company did not disappoint.  I can’t wait to try a few more of their brews in the future.  What do you guys think is the best brew that Southern Tier produces?

Thanks for reading and be sure to leave a comment or hit me up on Twitter (@BeerApprentice and @shrews824) or Google+ (Scott Shrewsberry).