03 Dec
For today’s craft beer review I thought I would try the East India Pale Ale produced by the Brooklyn Brewery located in Brooklyn, New York.

It’s been quite some time since I last had this brew, so I’m a little fuzzy as to how I interpreted it back then.

Let’s get to website, brooklynbrewery.com, for a commercial description of this brew.

Everyday English ales were spoiling during shipment from London, around Africas Cape of Good Hope, to Calcutta.  Using extra malt and hops, British brewer George Hodgson developed an ale with the bitterness and strength to endure the long sea voyage, giving rise to a great beer style.  Our East India Pale Ale is a deep golden beer brewed from British malt and a blend of hops featuring the choice East Kent Golding variety.  It is traditionally dry-hopped for a bright aroma of hops, lemongrass, pine and citrus fruit, and has a robust bitterness, a warming malt palate and a clean hoppy finish.  We think Hodgson would be rather pleased. 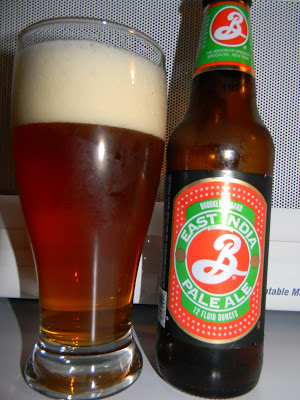 It poured a clear, dark orange to amber color.  Some burnt orange highlights were present at the bottom and around the edges of the glass.  It showed a big, billowy, smooth, soft, eggshell colored head that had good retention and adequate lacing.

The nose began with a nice waft of citrus in the form of peaches.  It was both piny and earthy also.  I started to notice quite a bit of grain as it warmed actually.  It seemed somewhat toasted and some notable caramel sweetness was mixed with a touch of butter to give it a bit more complexity.

Within the taste, I was getting, again, more of that grainy component.  Hmm.  The flavor did bring forth some earthy hop bite and bitterness, but not near as much as I was hoping.  Some of that caramel sweetness and toasted breads provided a little more to ponder as I worked my way down the glass.  Overall, I thought the taste was lacking some of the punch and kick that normally accompanies a great IPA.

The mouthfeel was medium, smooth, crisp, refreshing and thirst quenching.  It was both dry and slightly chewy.  It left an ok amount of flavor behind on the palate.  Not too bad with this aspect of the beer.

Well.  We have a pretty good beer here.  It’s nothing outstanding or overly complicated, however it’s “ok.”  This brew is very easy to drink and I would have no problem having a few of these at one time.  I will say that I don’t think it quite stacks up to some of the other beers I’ve had of this style.  However, I think the Brooklyn East India Pale Ale would be a great introductory beer for someone interested in exploring this type of brew, so give it a go if you have not tried it.  Be sure to let me know your thoughts of it also.

Thanks for reading and commenting folks.  I really appreciate it.  Until next time.

Posted by Beer Apprentice on December 3, 2011 in Brooklyn, Country: USA