Let’s forgo the small talk and jump right into this massive Double IPA.

The description from the website, hoppinfrog.com, is as stated.

Explore the extremes of hops, and experience all of their bitterness, flavor and aroma with this Double I.P.A. An extreme, super-assertive and satisfying amount of American hop character is balanced with a toasty, caramelized, intense malt presence. 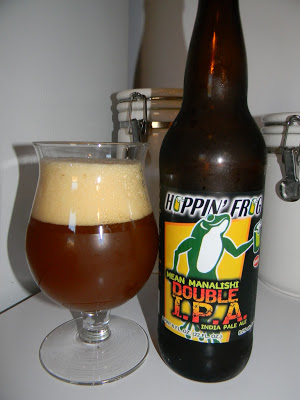 The brew poured a very cloudy, deep orange to caramel color.  Actually it looked like melted caramel.  The head was off white, very large, rocky, soft and frothy.  The retention time was great and the lacing was really thick and stuck to the sides of the glass.

The aroma was very pungent and acrid.  A strong caramel malt and hop citrus presence.  Mostly grapefruit and tangerine, however I was getting some very dank and musty tones.  Hmm.  Don’t know what to think about that.  I began to receive some earthy, wheat bread hints along with some scents of spice, herbs, pine and apple butter.  They seemed pleasant enough, however they couldn’t quite overtake that somewhat tainted mustiness.  I’ll have to say that I’ve encountered better “nose’s” than this on Double IPA’s before.

The taste was a fair bit better.  Heavy caramel malt intermingled with a sturdy dose of hops and hop bitterness.  Citrus flavors of grapefruit, tangerine and orange.  A toasted breadiness coalesced with spices and piny resins for a good little punch.  A slight bit of alcohol was noticed at the back of the throat, but it wasn’t enough to become distracting or off putting.  It finished with a distinct herbal quality.

The mouthfeel was medium bodied, dry, somewhat chewy with a tad bit of sharpness.  A competent amount of warmth was felt at the back end and plenty of flavor was left on the palate between sips.  The carbonation on this one was just average I thought.

Man, I was actually a little bit disappointed with this brew.  I mean, it’s ok I guess, but I probably won’t be picking it up again anytime soon.  Something just seemed off and I couldn’t quite put my finger on it.  It was still drinkable and I finished it, but the aroma was really throwing me for a loop.  Maybe I picked up an old bottle or something?  I don’t know.  Other than that, the beer looked fine, the taste was acceptable and the mouthfeel was passable.  I don’t know that I would go out of my way to find a bottle of this, but if you see it, pick it up, try it and see if you like it.  It could be that I just had a bad experience or just wasn’t in the mood for this beer.

Has anyone tried the Hoppin’ Frog Mean Manalishi Double IPA?  What did you think of it?  Be sure to let me know.

← Review of Sixpoint The Crisp
Review of Breckenridge Oatmeal Stout →