I’ve never had this brew before nor had I ever heard of it, so I’m going into this thing completely blind, which is always exciting.

Let’s see if we can find some information about this brew on the website, bestbelgianspecialbeers.be.

Tripel Karmeliet is still brewed to an authentic beer recipe from 1679 originating in the former Carmelite monastery in Dendermonde.  Written over 300 years ago, this recipe describes the use of three kinds of grain:  wheat, oats and barley.

The name Tripel Karmeliet thus refers both to its origin and its in-bottle refermentation.  From many trial brews of multi-grain tripels carried out at our brewery in the 90’s, it appears that the particular historic combination of the 3 kinds of grain still remains the ideal blend.

Sounds good enough to me. 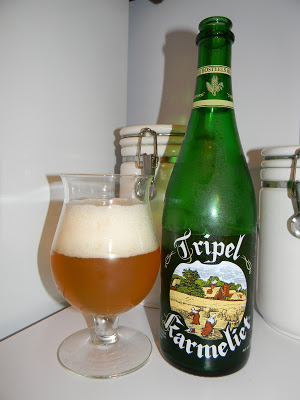 It poured a relatively cloudy, golden to honey yellow color with a bright white head.  The texture was soapy, rocky, soft, and billowy.  It was huge in stature, the retention time was very good and it left behind some patchy lacing for nearly half the drink.

The nose brought about a very clean and airy smell.  Some subtle spices of coriander mixed with hints of lemons, oranges and tangerines.  Light notes of yeast as well as some fine and fresh bready malts.  I noticed a very floral fragrance of honey suckle too.  Very nice.  As it warmed it became a tiny bit herbal, but overall very well balanced and pleasant.

The taste was very lively.  Spicy “bites” intermingled with some very clean bready and yeasty savors.  Just a touch of tartness from some of that lemon and orange citrus.  A light bitterness and subtle hops brought even more stimulation to the taste buds.  Only the most remote amount of alcohol was even noticed.  This brew had a very, very good flavor in my opinion.

The mouthfeel was medium bodied.  Dry, clean, crisp, mostly smooth and refreshing.  A vigorous amount carbonation sparkled on the tongue.  A small bit of warmth was felt at the back end and a suitable amount of flavor was left on the palate for me to ponder between sips.

I’ll tell ya.  This was a great little beer.  It would be perfect for those fresh Spring days when the flowers are in bloom.  It was a joy to drink and it was quite easy to down also.  I would have no problem making an afternoon out of it that’s for sure.  It really represented the style well and it would make for a great conversation piece.  So, if you see the Bosteels Tripel Karmeliet sitting on the shelf at your bottle shop, definitely give it a try.  I’m glad I did.  With that being said, when I first started drinking craft beer about 5 years ago, I didn’t much care for “Belgian” beers, but as I’ve gone along and tried more and more of them, I’m really starting to appreciate all that the style entails.

What are some of your favorite Belgian styled beers?  Leave a comment and let me know.

As always, thanks for reading.  I really appreciate it.

Posted by Beer Apprentice on January 19, 2012 in Bosteels, Country: Belgium