I can’t say that I know much about this brew, so let’s get to the website, hsbeer.com, and see what we can find out.

Pale in color and rich in malt flavor. With firm structure of noble hops it is both powerful and complex. Pairs well with chicken and fish.

Let’s get it into a glass, shall we? 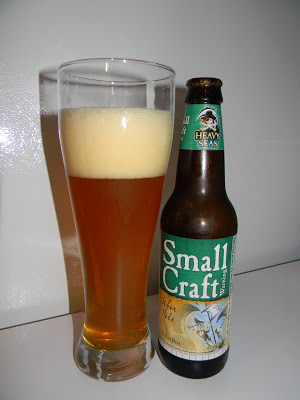 With the pour the beer appeared an orange to golden color.  It was mostly clear with some burnt yellow and orange highlights at the bottom of the glass.  The head was off white and of real nice size.  It was kind of soapy, soft, rocky and billowy.  The retention seemed pretty good and the lacing looked ok too.

The aroma of the Uber Pils presented fruity hints of orange and lemon citrus.   A decent amount of breadiness and some grainy aspects mixed with some hints of spice.  It was nicely balanced, however it was not overly robust, complex or strong.

The taste revealed a bit more of the grain and breadiness.  A slight hop profile and a decent sting of bitterness was noticed.  Some more of the orange and lemon citrus added a bit of brightness as well as some sweetness.  Hints of white pepper spice helped create some character and aided in balancing the taste.  Not bad.

The mouthfeel was medium bodied.  The carbonation was good and it had a suitably dry and crisp feel.  It was mostly smooth and a very light warmth from the pepper spice and alcohol gave a bit of pleasure.  A little bit of flavor was left behind so as to savor a bit of the taste after the sip.

This was a decent brew I thought.  It wasn’t quite like a typical Pils though.  It was a bit more floral and hoppy than a typical Pilsner styled beer might be.  It had a more than worthy aroma and flavor and I think it would pair well with the Spring and Summer season, however it wasn’t overly complicated or complex.  I think it would be worth your while to give it a try if you see it.  It’s a fairly easy drink for 7.25% and it displayed plenty of character to accredit some discussion.  All in all, it was just a nice, enjoyable and refreshing drink.  So, if you see the Heavy Seas Small Craft Uber Pils, give it a try and let me know your thoughts.  Do you think it’s worth a second go-round?

Thanks for reading and commenting guys.  I appreciate it.