It’s been about a year since I last had this brew and, honestly, I can’t remember much about it.

Let’s get to the website, dogfish.com, and find a commercial description of the Chicory Stout.

Chicory was one of the first beers we started brewing at our pub back when it opened in 1995. It’s a dark beer made with a bunch of roasted chicory, organic Mexican coffee, St. John’s Wort and licorice root. We use whole-leaf Cascade and Fuggle hops, as well as pale, roasted and oatmeal grains.

Back in 1995, we had a teeny, tiny brewing system and had to brew all day, every day to keep the bar stocked. Brewing with the same four ingredients got really boring really quickly. That’s when Sam’s ADD kicked in and he started adding some nontraditional ingredients.

Chicory Stout is our winter seasonal and released in bottles each year in November and December. We do brew this beer in smaller, draft-only batches for our brewpub throughout the year.

Chicory is roasty and delicious, and it’s a fantastic food beer. It pairs very well with chocolate! 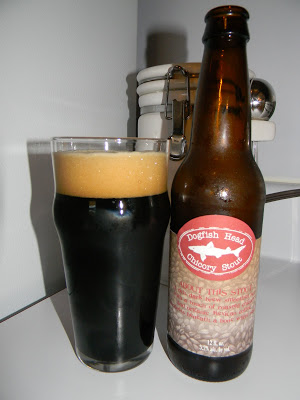 The beer poured a very dark brown to black color with some ruby highlights showing around the curves of the nonic glass.  It had a very nicely sized, light tan head that was smooth, creamy and soft in texture.  The retention time was good and the lacing seemed mostly average to me.

The nose brought forth a nice roasted coffee bean and espresso note.  Light hints of chicory and chocolate combined with a “whole” milk fragrance.  Some woody and earthy tones gave the nose a touch more of that “darker” aspect.  It seemed to be pleasing and balanced fairly well I thought.

The taste revealed the woody chicory with additional savors of roasted coffee.  Light hints of smoke as well as very subdued flavors of chocolate.  I found it to have somewhat of a grainy profile too.  A light hop persona conceded to a noticeable bitterness as well.  Like the aroma, the taste was earthy and herbal for the most part.

The mouthfeel was medium to slightly medium/thin.  It was smooth and mostly dry, slick and slippery.  The carbonation was decent and an ok amount of flavor was left behind on the palate.

The Chicory Stout is a decent little brew.  It was very easy to drink and quite sessionable.  It wasn’t as forthcoming as what we’ve come to expect from Dogfish Head, but it was still a pretty good and enjoyable drink.  I didn’t find it to be overly complicated or boisterous, but rather just and easy going Stout that would be worth a try if you come across it.  It would be a great beer to introduce to someone who was curious about trying a Coffee Stout that’s for sure.  What do you guys think of the Dogfish Head Chicory Stout?  Do you like it?

Thanks for reading guys and don’t be bashful about leaving a comment either.