I’ve never even heard of this beer or this brewery before, so who knows what we are going to find.

From the website, dieuduciel.com, we find this description of the Solstice d’hiver.

This noble winter beer is brown in colour with flaming red highlights. Its taste is delicately sweet and liquor-like with a hint of burnt caramel coming from the malt and a prolonged boiling time. It is a very bitter beer with aromas of hops and alcohol, and flavours reminiscent of red fruit brought by the English-type yeast we use to ferment it. The aftertaste is accentuated by the wonderful flavour of hops. Solstice d’Hiver is brewed only once a year, and is then aged for 4 to 5 months before being sold. This aging process is necessary to achieve an ideal equilibrium between the sharp bitterness and the other flavours in the beer. 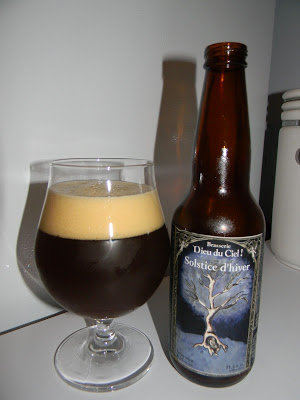 It poured a very, very dark burgundy to brown color with a very light tan head.  The cap had great girth plus it was creamy, soft, fluffy and semi-rocky.  The retention time was very gratifying and the lacing seemed quite good too, although after a little while, no lace was left on the glass, but it did leave a thin ring around the edge of the snifter.  A fine showing of alcohol feet were left clinging to the sides as it was tilted also.

The nose had a wonderful presence of caramel malt along with a well blended waft of booze.  Dark fruit hints of raisins and dates were infused with some light woody and leathery tones.  A relish of toasted dark breads and mild earthy hops helped to create and round out a nicely balanced aroma.  This fragrance was not extremely robust or “loud”, but it did smell rather sweet and proper.

The taste beget nice savors of caramel sweetness.  A prevalent “booze” stabbed the taste buds at first, however the entire alcohol tone subsided as the palate adjusted.  The dark fruits of dried raisins and dates were a bit more relaxed as well, but I still got enough flavoring from them to satisfy me.  An earthy, herbal hop bite and bitterness were discovered, but it seemed as though the “woodiness” and “leathery” flavors were a tad more reposed than they were in the aroma.  Again, pretty well balanced and tasty, but just a bit mild in comparison to some other Barleywines out there.

The mouthfeel was a sturdy medium to medium/full.  Smooth, slick and chewy all around.  It had some very nice carbonation and a nice little burn at the back end that gave way to a very pleasant warmth after a few sips.  Plenty of flavor was left behind on the palate after the swallow too.

Well, we have another very good beer here.  Not “world class” in my opinion, but still pretty darn agreeable.  Even though it may be a touch complacent, it still had plenty of aroma and flavor to suit most anyone I would think.  It seemed to have a similarity to an English Barleywine instead of an American Barleywine (more malt forward and with a feeble hop presence).  It’s a sipper for sure, but still an easy drink I thought.  If you favor Barleywine styled beers, I’d definitely say to give this a shot if you see it.  I know I wouldn’t mind having it again if given the opportunity.  With that being said, let me know what you think of the Solstice d’hiver once you try it.

Thanks for reading and commenting guys.  I’m thankful.

4 responses to “Review of Solstice d’hiver”