04 Mar
Hi guys.  I hope everyone is doing alright this evening.  For today’s craft beer review I’m going to be trying the Fleur produced by the Goose Island Brewery located in Chicago, Illinois.

I’ve never had this beer before and, unfortunately, it is no longer being brewed, so I was lucky enough to be able to pick up a bottle before it was too late.

From the website, gooseisland.com, a description of the Fleur is still available for us to read.

A Belgian style pale ale blended with hibiscus and kombucha tea, Fleur is a beautiful, rose-colored ale with an aroma of strawberries and hibiscus flowers. Her flavor balance starts with a hint of sweet, ripe berry and finishes tart.

I’m ready for a sip or two. 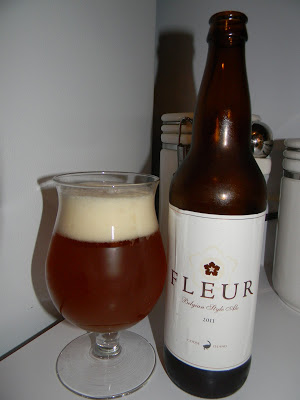 It poured a hazy, copper to deep orange color.  An off white head of very good size was formed from a medium aggressive pour.  It was very creamy, smooth, frothy and soft.  The retention time was adequate and the lacing looked ok.  It settled to a nice ring around the edges after a few minutes.

The nose brought forth hints of white grapes, inconspicuous green apple and medium strength sour notes.  It was quite flowery, bright and somewhat lively.  A recognizable Belgian yeast fragrance, relaxed white bread accents and some sort of spice kept rearing its head, which in turn added quite a bit of intricacy.  A very, very light perception of strawberry started to pop out as the brew warmed too, which contributed even more complexity and increased the pleasure of the bouquet.  A lot going on here, however it wasn’t very robust or “loud”.

The berry like fruitiness stood out a bit more in the taste than it did in the aroma.  White grape skins were still easily noticed and the spice began to lean more toward white peppercorns I thought.  It had a very nice Belgian yeast kick with a floral component and a lightly toasted breadiness throughout the middle.  The sourness and tartness was very, very relaxed and it actually became almost insignificant the longer I sipped.  A nice flavor overall, although maybe just a smidgen underscored.

The mouthfeel was medium to medium/thin bodied.  It was very dry, lively, spritzy, smooth, refreshing, crisp snappy and thirst quenching.  A very good amount of carbonation was to be had, but only an average amount of flavor was left behind after the swallow.

Well.  I thought this was a very good beer.  It would be ideal to have on a warm Spring day that’s for sure.  I know I had a blast drinking it.  It wasn’t an overpowering or obtuse brew, but rather, just a fun, flavorful, highly drinkable and lively beer that had plenty of character and stability.  It’s unfortunate that Goose Island doesn’t make it anymore because I would definitely pick up another bottle or two to share with friends.  The label states that it can be aged for up to 5 years, so that’s always a plus too.  It’s possible that you may still be able to find a bottle of the Fleur sitting on a shelf somewhere.  If you see it, pick it up and give it a try.  I think you may like it.

Thanks for reading and commenting guys.  I appreciate it.