I really liked the Grut Bier that Dr. Briem produced and I’m sure this beer will be a tasty treat as well.

Ratebeer.com was the only place that I could find any kind of description of this beer.

Created by Dr. Fritz Briem of Doemens Institute, brewed by Weihenstephan & Doemens (ed: Weihenstephan denies this), “1809” is a very traditional interpretation of the “Berliner Style” Weisse with an intense blend of lactic tartness and complex fruitiness. It is bottle-conditioned, unfiltered and unpasteurized. “1809” will age beautifully in a dark and cool location. Its complex fruitiness and tartness will most likely develop in quite astonishing ways. “1809” is fermented in traditional open fermenters and horizontal lager tanks. The applied mashing regime is a single step decoction mash with 50 % wheat malt.The total amount of hops is added to the mash so that isomerisation takes place in the decocotion part of the mash. The wort is not boiled but only heated up to boiling temperature and then transferred to the open fermenters and pitched with yeast and lactic acid bacteria (isolated from malt) at 18 °C (64°F). 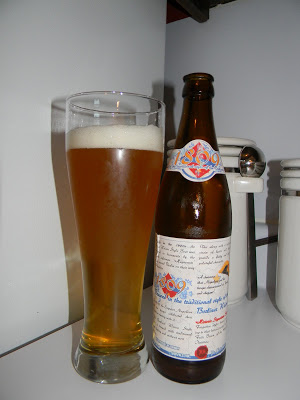 The 1809 poured a cloudy, golden to deep yellow color.  The cap was bright white, soapy and very fizzy.  The retention time was poor and the lacing was non-existent.  I could see a steady stream of bubbles rising from the bottom of the glass however.  Overall, I was a bit disappointed in the appearance of this beer.

The nose was much better.  A honorable amount of sourness jumped out at first.  Hints of lemon citrus and apples.  It kind of smelled like apple juice.  It also revealed a sturdy amount of wheat”y” goodness.  As the brew began to warm it became quite earthy, herbal and musty.  Not bad at all.  It was balanced very well and had plenty to be happy about, however it wasn’t overly complex or confusing.

The taste exposed some green apple sourness and lemon zest.  A light tartness was affirmed, but I didn’t receive much acidity or anything like that.  It had a very strong wheat flavor which, like the smell, gave it that earthy and herbal quality.  A pretty nice tasting beer right here.  Noble and to the point.

The mouthfeel was medium to thin bodied.  Very dry, snappy, thirst quenching, crisp and refreshing.  A subtle sharpness was felt for the first half of the beer, but it gradually smoothed out as the beer warmed to room temperature.  A befitting amount of flavor was left on the palate after each sip.

Well, aside from the appearance of this brew, I thought, overall, that it was pretty good.  You can easily tell that it’s a well made beer.  It wasn’t quite as nice as the Grut Bier in my opinion, but they are different styles I guess.  The drinkability was awesome though and I for sure think it would match perfectly with the warmer weather of Spring and Summer.  I wouldn’t mind having it again if it were offered and I would recommend you guys pick up a bottle and see what you think of the Dr. Fritz Briem 1809 Berliner Weisse.  If you’ve already tried it, what was your impression?

Thanks for reading and commenting guys.  As always, I really appreciate it.