Review of Pretty Things Once Upon A Time X Ale: November 22nd, 1838

25 Aug
Hello everyone.  For today’s craft beer review I’m going to be trying a Pretty Things Once Upon A Time X Ale:  November 22nd, 1838 produced by the Pretty Things Beer & Ale Project located in Cambridge, Massachusetts.

I’m really interested in trying this brew.  I’ve been impressed with all that I’ve tried from Pretty Things thus far, so I’m hoping this one continues in my joy of their beers.

It was released as a “twin” set with the Once Upon A Time X Ale:  February 22nd, 1945, which I will be reviewing at a later date.  From the website, prettythingsbeertoday.com, we find this bit of information about these particular beers.

Mild was a hugely popular style for more than a century (1800-1900s). Here, we have released two mild ales side-by-side.: two beers from opposite ends of that period, brewed by the same brewery. If you drink both, you will drink the same brand from the same brewery separated by 107 years. Over those years, Mild changed considerably: something these beers amply demonstrate. Though bearing the same name, X Ale, in character they could hardly be more dissimilar. The 1830s saw the beginning of a boom in Mild ale brewing, which in 30 years became England’s favourite beer. This beer, 1838 X Ale is a typical London Mild of the era: bigger and more robustly hopped than modern versions. Brewed from 100% pale malt and Kent hops, this is a straightforward, uncomplicated beer, much like the working classes who first drank it. The colour is also much paler than you might expect. From this original form, Mild was to undergo many transformations, culminating in the second beer in this series, February 22nd, 1945. Drink them side-by-side to compare how this beer style evolved. 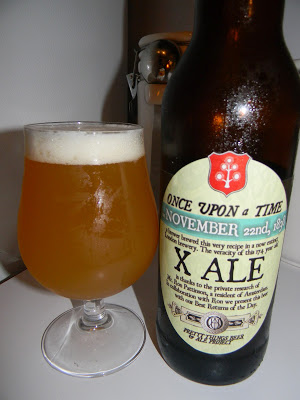 It poured a hazy golden/orange color.  It looked a little like orange juice.  The head was off white and well sized.  The texture was kind of creamy, soft and filled with small, tightly compacted bubbles.  The retention time was good as was the lacing.

The nose brought forth a very nice biscuity malt.  Spicy breads and yeast with slight inklings of grain.  An abundant amount of grassy and earthy hops were intermingled with a light fruity relish of pear and orange citrus.  Overall, very well balanced, pleasant and solid I thought.  A nice smelling bouquet with this one.

The taste released more of the sturdy bready notes.  Again, quite a bit of biscuity malt along with an easily identifiable grassy/earthy hop profile.  An almost Imperial Pilsner type of malt I thought.  The bitterness was indeed mild, but it did give a slight tickle on the sides and back of the tongue.  More fruitiness was accounted for as well.  Pears, juicy red apples and just a touch of orange.  The flavor was nearly identical to the aroma.

The mouthfeel was a solid medium.  Very dry and very smooth.  It was almost creamy feeling.  A very fine medium strength carbonation allowed for a good dose of flavor to be left behind after each sip.  This brew was darn near refreshing and thirst quenching to be honest.

Well, I really liked this beer.  It was extremely easy to drink and it totally hit the spot.  I do believe that any level of craft beer drinker could appreciate and enjoy this brew.  It’s very good all around.  It looks great, smells nice and is very tasty.  I really enjoyed the style too.  I wish I could get my hands on a couple more bottles that’s for sure.  It’s a beverage that could be sipped slowly and contemplated or it could be drunk at a social gathering without much fanfare.  Either way, I think it would be wise to seek out a bottle of the Pretty Things Once Upon A Time X Ale:  November 22nd, 1838 and see what you think.  Feel free to let me know your opinion also.  I’d really be interested to see if you enjoyed it as much as I did.

Thanks for reading and commenting everyone.  I’m grateful.