Review of Pretty Things Once Upon A Time X Ale: February 22nd, 1945

From the website, prettythingsbeertoday.com, we find out that this is the second of a twin release set along with the Once Upon A Time X Ale:  November 22nd, 1838 edition.

Mild was a hugely popular style for more than a century (1800-1900s). Here, we have released two mild ales side-by-side.: two beers from opposite ends of that period, brewed by the same brewery. If you drink both, you will drink the same brand from the same brewery separated by 107 years. Over those years, Mild changed considerably: something these beers amply demonstrate. Though bearing the same name, X Ale, in character they could hardly be more dissimilar. The 1830s saw the beginning of a boom in Mild ale brewing, which in 30 years became England’s favourite beer. This beer, 1838 X Ale is a typical London Mild of the era: bigger and more robustly hopped than modern versions. Brewed from 100% pale malt and Kent hops, this is a straightforward, uncomplicated beer, much like the working classes who first drank it. The colour is also much paler than you might expect. From this original form, Mild was to undergo many transformations, culminating in the second beer in this series, February 22nd, 1945. Drink them side-by-side to compare how this beer style evolved.

Let’s give it a try. 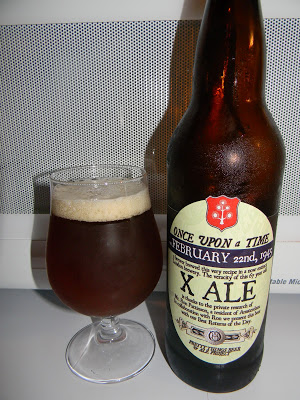 It poured a deep, golden/brown color with an off white head.  The size was sufficient and the texture was kind of soapy with some larger bubbles.  The retention time was alright and the lacing looked ok.  Overall, not a bad looking beer sitting in the glass.

The nose had a very nice waft of toasted breads, grain and biscuits.  Hints of a spicy rye or something as well.  It also smelled like dried leaves.  Towards the end I started to pick up on a slight inkling of caramel malt.  The bouquet was quite admirable and harmonized.  I liked it.

The taste revealed some burnt and toasted grains.  Savors of wheat and rye bread.  Somewhat spicy too.  Kind of like poppy seeds.  Very light caramel malt flavors and some earthy goodness.  In a lot of ways it reminded me of unsweetened tea.  Again, nicely balanced, but not overly robust.

The mouthfeel was medium to medium/thin bodied.  Mostly dry and smooth.  The carbonation was admirable, but not a terrible amount of flavor was left behind.

Well, I wasn’t really sure what to expect from this brew, but I quickly found out that it was pretty good.  It’s a “true” session beer.  The drinkability was outstanding.  I couldn’t believe how much flavor it packed for such a low ABV beer.  I can’t say that it’s my favorite style, however I enjoyed it nonetheless and had no trouble whatsoever in finishing the bottle.  So, if you guys happen to see the Pretty Things Once Upon A Time X Ale:  February 22, 1945, give it a try and tell me what you think.  I’d be interested in hearing your opinion.