For today’s craft beer review I’m going to be trying the Panil Barriquee Sour produced by the Panil Brewery located in Torrechiara, Italy.

I haven’t had too many Italian beers in the past, but this one comes highly recommended.

The website, www.panilbeer.com, was written in Italian, so I checked ratebeer.com and found this:

The Sour has a sticker to differentiate it from the sticker-less Barriquée Mild, which has not been inoculated with lactobacillus bacteria. 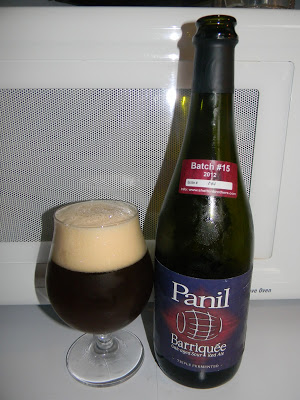 It poured a deep brown to dark ruby color.  The crown was slightly off white, well sized, creamy, soft and mostly smooth.  It was a bit fizzy on the initial pour, however it leveled and calmed down to hold its form.  The retention time was more than adequate and the lacing was very thick and clingy.

The nose brought forth some beautiful tones of soured dark grapes and black cherry.  A nice and well blended fragrance of wood and oak helped to counterbalance those tart fruits.  A slight vinegar redolence was welcomed as it only became noticeable as the brew warmed.

The taste presented a very manageable amount of sourness from the dark grapes and dark cherry.  Again, only a minor touch of vinegar was noticed and the tartness seemed to be tamed quite a lot as well.  The wood and oak gave the impression of being way more forward in the taste than they were in the aroma.  I also noticed some dark breadiness in the there also, which I didn’t find in the nose.

The mouthfeel was medium bodied.  Very dry, slightly sharp and bitey with a very mild, subtle warmth from the alcohol.  The carbonation was very good and of medium strength.  An excellent amount of flavor was left covering the palate long after each sip.

Overall, I thought this was a very, very nice beer.  It was not one of those overpowering, completely lip puckering Sours that I’ve run across from time to time, but it definitely provided enough of that characteristic to keep me satisfied for the duration.  It was well balanced and solid all around.  Not to mention the fact that the drinkability was way better than average.  I’d have no problem recommending the Panil Barriquee Sour to anyone looking to try a seemingly rare beer.  I’d never turn it down that’s for sure.  Have you guys tried the Panil Barriquee Sour?  What was your impression?

Posted by Beer Apprentice on December 8, 2012 in Country: Italy, Panil