The website, proefbrouwerij.com, didn’t provide any information regarding this specific beer, so let’s just get it poured and see how it is. 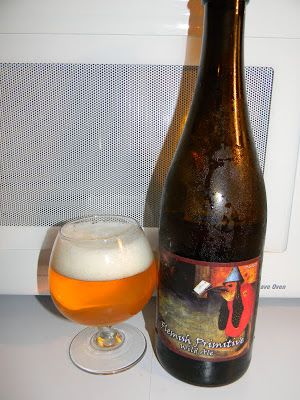 I poured a relatively clear golden color with a bright white, somewhat soapy head.  It was sized nicely and the retention time was rock solid.  The lacing looked pretty good too.  It was a very attractive looking beer in my opinion.

The nose released a nice musty hint of funk at the very beginning.  It then developed some grassy tones with whiffs of hay and yeasty goodness.  It also produced a fragrance of green grapes as well as some lemon pepper spice.  About midway through I detected a quick scent of soap which dissipated shortly thereafter.  All in all, a pleasing bouquet I thought.

The taste had a tolerable tartness and sourness, which was composed of lemon citrus, green grapes and a light touch of green apple.  It also had a bit of funkiness that reminded me of some Brettanomyces.  It was quite grassy, bready, yeasty and it also had a sturdy amount of peppery spice.  I found no alcohol, which surprised me somewhat considering the 9.0% ABV.

The mouthfeel was medium bodied.  Only slightly sharp, very dry and crisp with a lively carbonation.  A modest amount of warmth was discovered from either the peppery spice or the alcohol.  More than enough flavor was left on the palate after each sip too.

I tell ya.  I thought this was a great beer.  I want to thank A.J. for recommending it. I’m sure glad I took his advice and picked up a bottle.  It was such an enjoyable and easy drink and one that would fit well at any point during the year.  It’s definitely worth a try if you can obtain a bottle.  So, with that being said, pick up a bottle of the De Proef Flemish Primitive Wile Ale (Surly Bird) and enjoy.  I think that you would agree with me in that it’s a “diamond in the rough” that should be sampled on a regular basis.