31 Jan
Hello again everyone.  Thanks for checking back in on another craft beer review.  For today’s tasting I’m going to be trying the Jester King Le Petit Prince produced by the Jester King Craft Brewery located in Austin, Texas.

So far, I’ve been really impressed with the other Jester King brews I’ve tried, therefore I see no reason to believe that this one will not be solid and satisfying.

From the website, jesterkingbrewery.com, I discovered this pleasant little description of the Le Petit Prince.

A clear and simple expression of the delicate interplay between noble hops and farmhouse yeast. Throughout Northern Europe, light-bodied, well-hopped, low alcohol table beers were often the beverage of choice with all meals at times and in places where the water wasn’t always safe to drink. 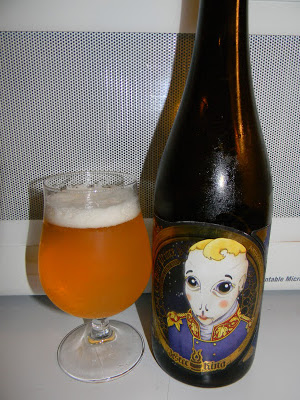 It poured a semi-hazy, golden color with a nice white head.  It was sized fairly well and it had a somewhat soapy and fizzy texture.  The retention time was ok and the lacing looked pretty good I thought.  Not bad on the appearance.

The nose brought forth some lemon citrus, a bit of yeast and a decent waft of clean white bread.  It was slightly floral too.  Hints of grassy hops and wheaty grain accompanied a very light funkiness and peppery spice.

The taste was very, very, very light.  I guess that was to be expected considering.  It was lemony, grainy and grassy.  Maybe a touch of straw as well.  That was about it.  I didn’t detect any funkiness or spiciness in the flavor.  I was just a tad surprised by that especially since the nose was fairly complex and lively.  Oh well.

The mouthfeel was thin bodied.  Smooth, crisp, refreshing and thirst quenching.  I found it to be quite watery also.  The carbonation was of medium strength and not a terrible amount of flavor was left behind on the palate after the swallow.

Overall, I found this beer to be acceptable and agreeable, yet not quite as powerful as some of the other low ABV brews I’ve tried in the past.  It’s definitely not a beer that’s going to overwhelm you with flavor, but that’s not a common factor with a “table” beer like this anyway.  That’s not saying that it’s devoid of character.  It has enough to keep one interested, however I do believe that it is meant to be drunk without much fanfare. It would be perfect with a meal during those hot and humid days of Summer for sure. It could have been because I tried it during the middle of December or something, but I was just hoping for a little more from this beer.  Maybe I’ll try it again in a few more months and have a different take.  So, with that being said, give the Jester King Le Petit Prince a try if you have yet to do so and tell me what you think about it in the comments.