It’s been forever since I last had an Abita brew, so when I saw this “special” brew I figured I’d pick it up and give it a go.

From the website, abita.com, I found this bit of info regarding this anniversary beer.

Turbodog® is the inspiration for this robust dark ale. Double Dog is brewed with generous amounts of pale, caramel, and chocolate malts and Willamette hops. Whole, natural vanilla beans are added during the aging process. This combination provides a rich body and color with chocolate, vanilla and toffee-like flavor.

25 years ago the Abita Brewing Company was founded on a pristine, artesian aquifer north of New Orleans. For a quarter of a century, Abita has proudly brewed full-flavored ales and lagers. We thank our loyal customers for their support and pledge to continue the tradition of brewing excellence.

Alrighty then.  Let’s get it poured. 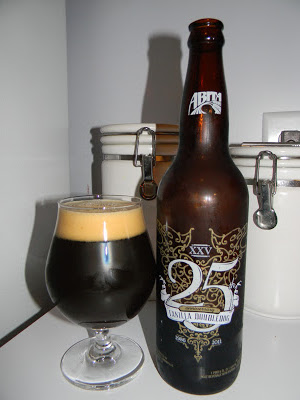 It poured a dark brown to a very dark black cherry to ruby color.  The head was an off white/eggshell color.  It was smooth and somewhat creamy.  The size was commendable, yet the retention time and the lacing were only “so-so”.  Both seemed to fall back into the liquid fairly quickly.

The nose released heavy hints of wheat bread.  A slight toastiness and maybe even a touch of hazelnut was discovered as well.  A bit of chocolate was found, however I didn’t stumble upon much vanilla to be honest. It did smell quite earthy and round though.  Overall, not a bad aroma.

The flavor was rather nutty and toasted.  The vanilla was a tad more forthcoming in taste than it was in the aroma.  It still wasn’t overly aggressive though.  Again, a bit of chocolate was discovered and maybe even a dollop of caramel too.  Also, the breadiness seemed to remain consistent with the bouquet.

The mouthfeel was medium bodied.  Smooth, sort of dry and slick.  The carbonation was of medium strength and I found no heat or warmth from the 7.0% ABV.  A decent amount of character was left behind on the palate for me to enjoy between sips.

Well, this beer wasn’t bad.  It wasn’t the best I’ve ever had, but it was respectable.  I think it would be a pretty nice beer for the Fall season because of the toasty and nutty aspects.  I was hoping for a bit more vanilla, but…. oh well.  It was what it was.  It was fairly easy to drink and I wouldn’t have a problem drinking it again if it were offered.  It would be worth a try if you were to see it on the shelf, however I don’t necessarily think that I would go out of my way to obtain a bottle.  So, with that being said, pick up a bottle of the Abita 25th Anniversary Vanilla Double Dog and give it a try.  You may really enjoy it.  Be sure to leave a comment if you wish and tell me of your opinion.

Thanks for reading everyone.  I’m grateful for all of the interaction.

Posted by Beer Apprentice on February 14, 2013 in Abita, Country: USA