16 Feb
Hello everyone.  For today’s craft beer review I’m going to be drinking the Affligem 950 Cuvée produced by the Brouwerij Affligem located in Opwijk, Belgium.

This beer is supposedly fairly rare here in the states and it’s been a long time since I last had a brew by Affligem, so the 950 Cuvée seemed liked the perfect brew to reintroduce myself.

The website, affligembeer.be, didn’t reveal any information regarding this beer, so I’m just going to pour it and see for myself. 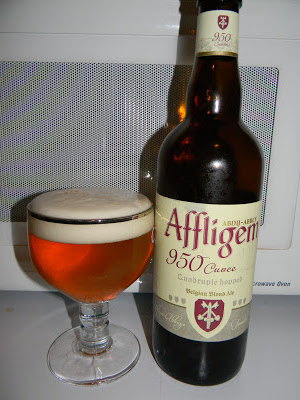 The pour was a good one.  It was a clear, golden/orange color.  The head was white, soft, sort of frothy and just a wee bit rocky.  It was sized very well and the retention time was more than adequate.  A solid amount of patchy lacing was left behind as the crown settled.

The bouquet was quite clean and fresh as it released hints of semi-sweet bready and yeasty malts.  Sturdy floral and grassy characteristics.  A light pear fruitiness was discerned as well.  A definite unsalted cracker or wafer type of aroma was detected too.  In a lot of ways it reminded me of a Pilsner on the nose.

The taste began with some very crisp and clean malts.  More yeast along with white bread and crackers.  Some more fruitiness was to be had in the form of pear and even a touch of light lemon.  I even tasted the most subdued peppery spice also.  Just a slight observance of alcohol was encountered, but it wasn’t enough to deter from the overall flavor.

The mouthfeel was medium bodied.  Crisp, dry, somewhat refreshing and snappy, but smooth.  A minor dab of warmth was felt and the carbonation seemed to be a touch on the livelier side, but that didn’t do any harm as a noble amount of flavor was left behind on the palate for me to enjoy after each sip.

Overall, I thought this was a nice beer.  It wasn’t over the top, which made for a very easy and pleasant drink.  It’s not the best Belgium brew that I’ve ever tried, yet it was pretty good nonetheless.  It would be worth a try if you happen to run across it at your bottle shop.  Like I mentioned before, it kind of reminded me of a more “upbeat” Pilsner.  I think it would be well suited for any season, although I don’t know that it quite has the strength to really satisfy during the really cold days of Winter.  Either way, I wouldn’t mind trying it again sometime regardless of the weather.  Have you guys ever tried the Affligem 950 Cuvée?  What was your impression?  Feel free to leave a comment if you would like.  I’d love to hear from you.

Posted by Beer Apprentice on February 16, 2013 in Affligem, Country: Belgium