Hello everyone.  Thanks for checking back in on another craft beer review.  Today, I’m going to be trying the Ommegang Game Of Thrones “Iron Throne” produced by Brewery Ommegang located in Cooperstown, New York.

You know, I’ve never even watched a single second of that show, but when the bottle was offered for purchase I decided to give it a try.  It seems that all of the Ommegang beers that I’ve tried in the past have been solid enough, so it has to be decent right?

Let’s see what the website, ommegang.com, has to say about this special release brew.

Brewery Ommegang and HBO are partnering on a series of beers inspired by the critically-acclaimed drama Game of Thrones. Launching ahead of the season 3 debut on March 31, Iron Throne, a blonde ale, is the inaugural beer in the series and the result of a creative collaboration between Brewmaster Phil Leinhart and HBO.

“No one enjoys their job more than I do — producing and developing new brews to delight lovers of fine beer, add to that the opportunity to collaborate on a beer based on the cultural phenomenon of Game of Thrones and exploring ways to make the beer truly reflect aspects from the show. It made us approach development in a completely new way and I think the first edition Iron Throne reveals that. With a Lannister currently on the throne, it made sense to do a delicate, but piercing Golden Blonde Ale with Noble hops. Iron Throne is certainly fair in color and soft in appearance, yet it still possesses a complexity and bite to be on guard for.” -Phil Leinhart, Brewmaster at Brewery Ommegang

Ok.  Now that we have the low down let’s give it a try. 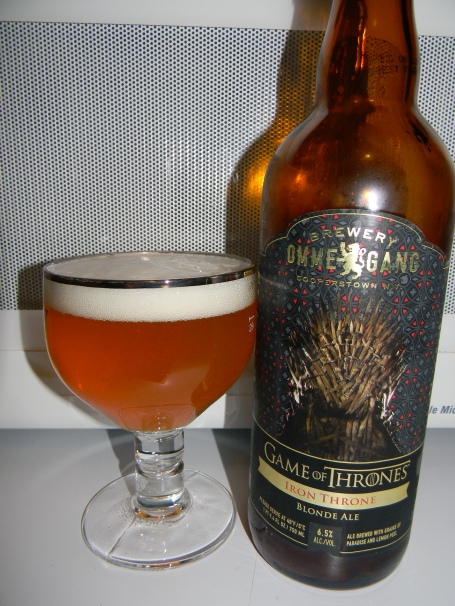 It poured a hazy, golden orange to yellow color with a nice, bright white head.  The texture was kind of smooth, yet kind of frothy, soapy and soft as well.  It was sized very well and the retention time seemed pretty good to me.  The lacing was more than adequate too.

The nose brought forth some breads, yeast and wheat.  Slight hints of lemon citrus intermingled with tones of coriander and pepper spice.  It seemed a touch simplistic and restrained, however it was balanced very, very well.

The taste and the aroma matched up near perfectly.  I might say that the flavor was a bit more forceful though. Either way, I thought the pepper and coriander commingled with the bready/yeasty goodness nicely.  The lemon citrus was duly noted again and added just a touch of sweetness.

The mouthfeel was medium bodied.  Smooth, dry and kind of crisp.  The carbonation was little on the livelier side, although it did settle down some after I worked my way through the bottle.  A nice shot of flavor was left behind for me to enjoy between sips also.

Overall, I thought this to be a pretty good beer.  It’s definitely a solid representation of the style that’s for sure.  I didn’t necessarily think that it was anything extraordinary, but it was far from underscored.  It’s a reliable and dependable take on a Belgian Pale Ale.  One that would suit the Spring season soundly.  The drinkability was high and with the not so robust ABV, a person could work their way through the entire bottle with relative ease. So, if you guys are able to procure a bottle of the Ommegang Game Of Thrones “Iron Throne”, pick it up and see what you think.  Be sure to tell me of your opinion when you do.

Posted by Beer Apprentice on May 15, 2013 in Country: USA, Ommegang

3 responses to “Review of Ommegang Game Of Thrones “Iron Throne””