It’s been a little bit since I last had a beer from Ommegang.  I’ve always enjoyed their brews fairly well, so when I saw the Gnomegang I figured I’d pick it up and give it a go.

Let’s check on the website, ommegang.com, and see what kind of info we can retrieve about this beer.

The cheerful gnomes of Belgian farmstead Brasserie d ‘Achouffe dropped by the Brewery Ommegang farmstead brewery in the summer of 2010. 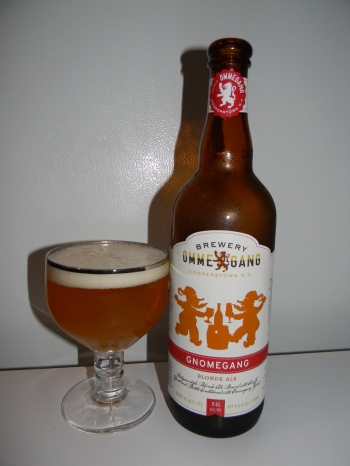 It poured a semi-hazy, yellow to orange color with a white head.  The cap was touch fizzy and soapy, but it was sized very well and the retention time was more than adequate.  The lacing was also quite decent as a few rings of foam remained on the sides of the chalice as I sipped.

The nose brought forth a bit of orange citrus and just a soft waft of banana.  A spice of clove as well as some bready and biscuit notes were there too.  The lightest lemongrass fragrance came about as it warmed and opened up as well.  Not a bad bouquet at all I didn’t think.

The flavor began with a strong bolt of yeast, bread and spice of clove and pepper.  Banana and orange citrus took care of the fruit aspect while some sugary, sweet bubble gum savors gave it some additional complexity. Finally, a light relish of alcohol finished it off.

The mouthfeel was medium bodied.  Smooth, mostly dry and a touch crisp with a good medium strength carbonation.  A little dose of warmth was felt from the alcohol and a solid amount of flavor was left behind on the palate after each swallow.

No doubt about it.  This was a very good beer and easily worth a try.  It had a lot going on with both the aroma and flavor and the drinkability was decent enough.  Some alcohol was found, but overall it was mostly well hidden.  I’d have no trouble trying it again if it were available that’s for sure and if you guys happen to run across the Ommegang Gnomegang at your local bottle shop, pick it up, give it a go and see what you think.  It’s not exactly “world class” in my opinion, however it makes for a fine experience.

Posted by Beer Apprentice on September 16, 2013 in Country: USA, Ommegang