30 Nov
Hi guys.  For today’s craft beer review I’m going to try the Organic Apricot Ale produced by the Samuel Smith’s Old Brewery (Tadcaster) located in Tadcaster, England.
I’ve never tried this particular Samuel Smith’s brew before.  I do favor a lot of their products however, so I’m eager to try it.
From the website, samuelsmithsbrewery.co.uk, we find this description.
Handcrafted at the tiny All Saints Brewery set in a time warp in Stamford using the old manually operated brewing equipment. Finest organically grown barley and wheat are used to create a complex ale which, having undergone primary and secondary fermentation with different yeasts and extended maturation, is taken to Samuel Smith’s small, independent British brewery at Tadcaster. There it is blended with pure organic cherry, strawberry, raspberry or apricot fruit juices and more organic beer to create fruit beers of considerable strength and flavour. The smooth distinctive character of the matured beer serves as the perfect counterpoint to the pure organic fruit juice.
Ok.  Let’s give it a taste.

This brew came in an 18.7 oz. bottle and it had an ABV of 5.1%.
It poured a hazy orange juice type of color with a soft, frothy, somewhat creamy, white head.  It was nicely sized and the retention time was fairly decent.  The lacing was solid.  It left nice rings of foam after each and every sip.
The nose presented a sturdy waft of apricot.  It was very clean, fresh and sweet smelling.  Hints of wheat and bread added some complexity.  It does smell an awful lot like fruit juice to be honest.
The taste released a very, very strong characteristic of juicy apricot.  A little too much for me actually.  It was very sweet and just a tad bit tart.  I even found it to be a touch sugary.  Some wheat, yeast and bread hid underneath, which tried to tame that sweet, fruity juice taste, however it had a hard time.  Thus the flavor became a touch one dimensional I thought.
The mouthfeel was medium bodied.  It was smooth, although quite crisp too.  Very dry with a pleasing amount of medium strength carbonation.  A good dose of flavor was left behind on the palate after each sip as well.
Overall, I thought this beer was “ok”.  Not horrible by any means, but I doubt I go searching for another bottle anytime soon.  I could tell it was well made, but it just had a bit too much sweetness and apricot for me.  That in and of itself made it somewhat difficult for me to drink.  It would be worth a try I guess.  Summertime might be the best time to sample it though.  Have you guys ever tried the Samuel Smith’s Organic Apricot Ale?  What was your experience like?  Be sure to leave me a comment and tell me all about it.
Thanks for reading everyone.  I really appreciate it.
Until next time.  Cheers.
Score:  3.5 out of 5
Grade:  B-

29 Nov
Hi guys.  For today’s craft beer review I’m going to be trying the Rogue Voodoo Doughnut Bacon Maple Ale produced by Rogue Ales located in Newport, Oregon.
I can’t wait to try this brew because, as we all know, this has been one of the most talked about beers produced in 2012.
Let’s jump to the website, rogue.com, and read the commercial description.
Rogue Ales has collided with Voodoo Doughnut to create Bacon Maple Ale! This unique artisan creation contains a baker’s dozen number of ingredients including bacon and maple syrup from one of Voodoo’s signature doughnuts.
Into the glass it goes.

This beverage comes in a 25.4 oz. bottle and it has an ABV of about 5.6%.
It poured a deep amber color with an off white head that formed to a very good size. It was smooth and kind of creamy.  The retention time and the lacing were both well above average.  Honestly, it looked pretty nice and inviting standing in the glass.
The aroma released the maple syrup for sure and a good deal of smoke was noticed right off the bat.  I found a little bit of bacon in there too along with some caramel sugar.  That’s about all I could pick out really.  I didn’t find the bouquet to be quite as “loud” as a lot of others have said.  It wasn’t horrible I didn’t think.

The taste wasn’t all that strong either.  I definitely discovered some of the syrup with a very relaxed smokiness.  Touches of bacon fat and a little bit more of the sugary caramel.  I thought it was balanced pretty well.  I don’t necessarily think the flavor was world-class, however it wasn’t all that bad to tell the truth.  Just different I guess.

The mouthfeel was medium to medium/thin.  I thought it would be much fuller.  Oh well.  It was quite dry and somewhat chewy.  The carbonation was decent, however not a terrible amount of flavor was left behind on the palate.

Well, I didn’t think this beer was THAT bad.  I don’t think it is something that I would want to drink everyday, but I’m glad I got to try it.  It’s quite unique and I applaud Rogue for creating it.  I’d drink it again if it were offered.  I think it could pair well with the cooler weather.  The drinkability wasn’t real good, but I made it through the bottle with no trouble.  So, if you guys are looking to try something a tad different, give the Rogue Voodoo Doughnut Bacon Maple Ale a try a see what you think.  Some will be turned off, although I do think it has its place in the beer world.  Be sure to let me know how you interpreted it if you’d like.

Posted by Beer Apprentice on November 29, 2012 in Country: USA, Rogue

26 Nov
Hello everyone.  For today’s craft beer review I’m going to be giving the Jester King Wytchmaker brewed by the Jester King Craft Brewery located in Austin, Texas a try.

Let’s just go ahead and get to the website, jesterkingbrewery.com, and see what kind of information we can drum up about the Wytchmaker. 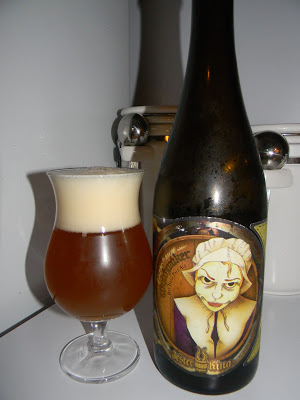 This brew comes in a 25.4 oz. bottle and it has an ABV of 7.3%.
It poured a hazy, deep golden/orange color with a few shimmers of some brighter orange highlights around the edges and through the middle.  The crowned formed to a very nice size and it was white, fluffy, soft and semi-rocky.  The retention time was excellent and the lacing was more than sufficient.  It was a very attractive and inviting looking beer.
The bouquet dispensed a compelling hoppy profile.  Very citrusy with hints of grapefruit and orange.  It gave up a light caramel malt as well as a little bit of yeast and some rye breadiness.  The funkiness was very subtle, however it did reveal a trace of lemongrass after it opened up and was allowed to breathe a bit.  A small waft of spice was discovered too.  I’m guessing that may have been from the presence of the rye.
The taste was a well balanced and semi-strong blend of the citrus and bready funk.  Again, bits of grapefruit, lemon and orange intermingled with fresh grassy tinges.  Spicy rye bread, yeast and very subdued caramel malts gave the savor a pinch of roundness.  Solid to the bone with the flavor.
The mouthfeel was medium bodied.  Mostly dry, crisp, refreshing and thirst quenching.  It wasn’t as dry as some of the other Farmhouse beers I’ve tried in the past, but it was still dry enough.  The carbonation was lively and “bitey”.  A sturdy dose of flavor was left behind after each gulp as well.
Overall, I found this beer to be very nice and I liked it very much.  Easily one that I would have no problem picking up again.  I would love to have this brew during the Spring or Summer.  I think it would be ideal once the temperature outside started to rise, however I do believe that I could enjoy it no matter what the weather.  The drinkability was outstanding.  I killed this bottle in no time flat!!!  I’d definitely recommend the Jester King Wytchmaker if you have yet to do so and if you can procure a bottle.  If you like Farmhouse/Saison styled beers, I think you may enjoy this one immensely.  I know I did.
Thanks for reading and commenting everyone.  I really appreciate it.
Until next time.  Cheers.
Score:  4.2 out of 5
Grade:  A-