10 Sep
For today’s craft beer review I’m going to be drinking a beer that was one of the first craft brews that I ever had and one that I thoroughly enjoyed back in the day.  I’m speaking of the Smithwick’s Imported Irish Red Ale brewed by Guinness Ltd. St. James Gate in Dublin, Ireland.

Smithwick’s used to be brewed by the Smithwick’s Brewery in Kilkenny, Ireland, however it was closed and now Guinness (guinness.com) has full reign over this product.

Smithwick’s is Ireland’s number one ale.  Its exceptional taste, distinctive colour and purity of ingredients make it unique.  Its rich, satisfying taste has earned it five gold medals in the famous Monde Selection Beer Tasting Competition.  Smithwick’s is produced using the finest hops and special roasted, malted barley.  In 1998 a new enhanced draught product with improved head retention was launched along with redesigned glassware.

It’s been a few years since I last had this beer, so I’m sure that my tastes have changed somewhat, but I’m hoping that I still find it enjoyable. 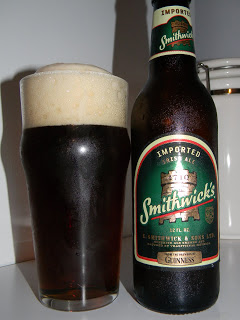 The appearance was a very clear, dark amber to ruby red color with a very light tan head attached.  The crown was considerably sized, fluffy, soft and somewhat creamy.  The retention time and the lacing were only average.  The head broke down quicker than I had hoped and the lacing slid down the glass speedily.

The aroma started with plenty of roasted malt.  Some tones of light nuttiness combined with a fair amount of caramel sweetness.  As the brew began to warm I detected a distinguishable graininess that I didn’t find all that appealing.  I don’t recall it being that “forward” in times past.

Within the taste I found even more of that heavy graininess combined with savors of butter, bread and some dark malts.  A little tickle of sweetness was stumbled upon in the form of those caramel malts and I also noticed that it had a tiny bit of a hop bite.  Much like the smell, as the brew began to warm, the graininess really started to overpower the flavor and become unpleasant.  Hmm.

The mouthfeel was medium, smooth and mostly crisp.  I actually thought it to be considerably watery.  The flavor vanished from my palate hurriedly.

When I first started drinking craft beer I really, really liked the Smithwick’s.  Well, no longer do I find this to be a beer that I would run to.  I do still think that it looks nice in the glass, however the aroma, taste and mouthfeel have little impact on me now.  They just seemed to be lackluster.  Some may find this brew to be wonderful…. and that’s great, but I doubt that I will go looking for it again in the near future.  I can definitely drink it, although I would probably be looking for something else to try after 1 pint.

Have any of you had the same experience with a “gateway” beer that you once loved???

Thanks to everyone for reading and commenting.  I’m enjoying all the feedback and comments.  Keep ’em coming.