Thanks for checking back in on another craft beer review guys.  For today’s drinking pleasure I’m going to be trying the Imperial Biscotti Break make by the Evil Twin Brewing Company based out of Valby, Denmark. (Actually, I think this particular beverage was brewed in South Carolina.)

I’ve had real good luck with the Evil Twin brews I’ve tried thus far, so I’m expecting this one to be no different.

From the website, eviltwin.dk, I read this blip about the beer.

The Roman Empire had a certain ‘je ne sais quoi’ – festive food culture, extravagant architecture and spectacular live entertainment. Some might argue the Emperors where brutal, mad and hungry for power, and the people vain when taking baths and working out all day. Listen – that’s still all part of the secret Imperial ingredient – keep it cool, clean, confident, arrogant and flamboyant. Forza Imperiale.

It poured black with no highlights.  The head was very dark brown and small with a very easy pour.  The texture was smooth, creamy, soft and dense.  The retention time was more than solid, however the lacing was a touch thin, but consistent.  That was surprising considering the tightly compacted bubbles.  It did leave a solid amount of alcohol skims on the sides of the snifter though.

The nose presented a nice roasted coffee bean tone.  Some hints of oats, milk chocolate and a touch of vanilla. It also had a scent of caramel malt and doughy bread.  This was a great smelling beer.  It was complex and for being so high in alcohol I didn’t detect a strong aroma.

The taste brought forth a nice coffee bean flavor.  A relish of toasted bread crusts and chocolate really peaked my interests.  It was slightly nutty too.  It was a touch bitter, but in a good way.  It was balanced well and I liked it.

The mouthfeel was medium/full bodied.  It was smooth, creamy, slick and chewy with just a notion of chalkiness.  The carbonation was medium to low and a good shot of warmth was felt as it went down to the belly.  A great deal of flavor was left behind after each sip too.  Nice.

This was a very good beer and a very good Stout in my opinion.  Definitely a sipper, but perfect for those cool evenings during the Winter time.  I’d love to pick this up again that’s for sure.  And you guys should too if you see it.  Be sure to leave a comment and tell me about your experience with the Evil Twin Imperial Biscotti Break if you try it.  If you like those coffee/chocolate Stouts I have no doubt that you will like this one.

It’s time for another craft beer review guys.  Today, I’m going to be drinking the Yang Imperial Taiji IPA brewed by the Evil Twin Brewing Company based out of Valby, Denmark.

I’ve been able to get my hands on quite a bit of Evil Twin stuff, however I’ve never had this one before.

As we look on the website, eviltwin.dk, we find this bit of info about the brew.

This is one half of a Black and Tan. Not just any Black and Tan, but the one where a toasted smug and a hoppy fella get together to make a sublime Taiji balance. Mix the Yang & Yin together (or enjoy this flipping good Imperial IPA solo).

Let’s give it a try, shall we? 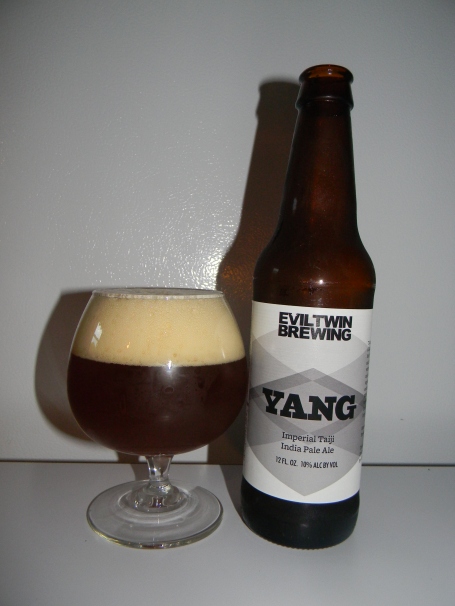 It poured an almost amber to red color.  It produced a well sized, off white crown from a medium aggressive pour.  The texture was soapy, soft, frothy and just a touch rocky.  The retention time was quite good and the lacing looked very nice.  I could see some clear alcohol on the sides of the snifter when swirled and tilted too. All in all, a very nice looking beer.

The nose was very resiny and dank smelling.  Some tropical fruit tones intermingled with a cotton candy type of fragrance.  Some sweet caramel malt and breadiness followed as it warmed while a small waft of alcohol couldn’t be denied.  The alcohol seemed to become more prominent with each sniff.

The taste provided a rather conspicuous hop bitterness.  Deep tropical grapefruit, pine and sticky resin.  A striking shot of caramel malt and dark breads were prevalent from the beginning.  As a matter of fact, it was quite malty I thought.  A sturdy relish of alcohol was discovered throughout also.  It had a robust flavor profile, yet it was balanced nicely.

The mouthfeel was medium to full bodied.  Dry, oily, slick, chewy and sticky.  The carbonation was of medium strength.  An embossed amount of warmth and flavor was left behind long after each sip had passed.

Overall, I found this to be an excellent “big” beer.  It had tons of flavor and character.  It wasn’t an extremely drinkable IIPA, but rather more of a sipper.  One that I think I would like to have once the cooler months arrive. I’m more of a IPA fan than I am an “Imperial” IPA fan, however this is one of the best I’ve had in sometime.  I’d recommend that you give it a try if you can obtain it.  I do have a few bottles of Yin left, so I may have to mix a Yang with one and try the whole Black & Tan thing.  So, if you guys sample the Evil Twin Yang Imperial Taiji IPA….. let me know what you think.  I love to hear your opinion.

Review of Evil Twin Ron and the Beast Ryan

Hello everyone.  Thanks for stopping by for another craft beer review.  Today, I’m going to be trying the Ron and the Beast Ryan produced by the Evil Twin Brewing Company positioned in Valby, Denmark.

I’ve heard some really nice things about this beer and I’ve had pretty good luck with the Evil Twin brews I’ve tried thus far, so we should be in for a pleasant experience with this one.

The website, eviltwin.dk, had this bit on info on the Ron and the Beast Ryan.

In Denmark we have a lovely tradition for funky beer, and what you have here is certainly no exception. This is a never before seen collaboration between Ron and the Beast Ryan. A fluffy and precious Saison brewed on the beautiful island of Fanø on the west coast of Denmark. It may sound like a true fairytale, but don’t be fooled by it’s cute appearance.

This particular beverage came in a 22 oz. bomber and it possessed an ABV of 7.0%.

It poured a hazy, orangish/yellow tint with a gargantuan white head.  The texture was very billowy, very soapy, very rocky and very frothy.  The retention time was incredible.  It did not want to die down at all.  Once it did settle somewhat the lacing left behind was very patchy, but very clingy.  Actually, the foam on top of the liquid never did quite dissipate all the way.  A little was left for the duration of the drink.

The nose released those great funky, musty barnyard notes that I love.  It definitely has that Brettanomyces characteristic to it.  Hints of lemongrass and hay along with some slightly soured green apple came forth next. Some floral components were discovered as well.  As the brew began to warm a bit of yeast along with lighter hints of peppery spice arrived to add even more complexity and balance.  A super good nose on this one I thought.

The flavor provided more of the “Bretty” goodness.  It was very manageable though.  Nothing overpowering or nothing that would distract from the other intricacies of lemongrass, hay and earthiness.  The peppery spice and the minutely soured green apple seemed to be more subdued in the flavor than they were in the bouquet I thought.  Also, the label stated that it was brewed with honey, however I can’t say that I discovered any.  Either way, it was still a very tasty brew.

The mouthfeel was medium bodied.  Mostly dry with a crisp, zesty, refreshing and thirst quenching aspect.  The carbonation was quite lively and a delicate amount of warmth was felt from the combination of the alcohol and light pepper.  An ok amount of flavor was left behind after each sip, however not as much as I was expecting. Oh well.

Yeah, Evil Twin has made another very nice beer with Ron and the Beast Ryan.  I really liked it.  Especially the funkiness.  It was plenty elaborate for some serious discussion, yet the drinkability was good enough to almost quaff without giving it much thought.  Therefore, this beer would be well suited for the hot days of Summer without having to revert to a “lawnmower” beer if you were looking for something that wouldn’t be a burden to drink, yet you wanted a little more kick.  So, if you haven’t had the Evil Twin Ron and the Beast Ryan before, I’d recommend you pick it up sometime this Summer and give it a go.  I think that it could satisfy even the most advanced craft beer drinkers palate.