We all know about Fullers, so let’s just get to the website, fullers.co.uk, and see what it has to say about this brew.

Bengal Lancer is an exciting, classic India Pale Ale from Fuller’s. Brewed to 5% ABV (5.3% in bottle), this ale has been inspired by the history and character of this traditional style of beer.

Bengal Lancer has returned to pumps for an extended period between Autumn 2012 and Spring 2013.

The beer is pale in colour, full-bodied with a distinctive hoppiness that marks it out as a true India Pale Ale. 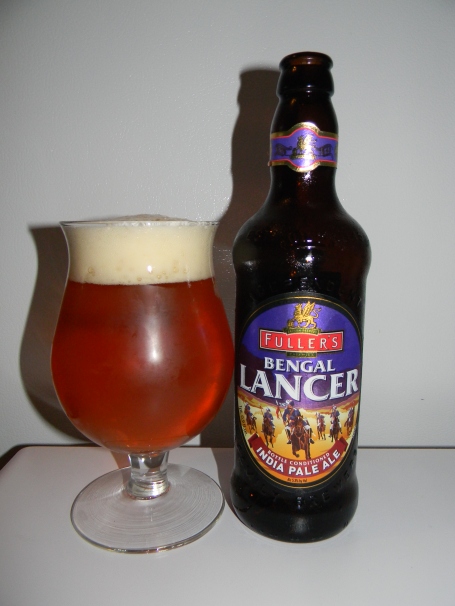 It discharged a relatively clear orange color.  Just a smidgen of chill haze was to be had.  The crown was barley off white, somewhat foamy and soft.  The size was good and the retention time was solid.  The lacing wasn’t the greatest, yet it wasn’t all that bad either.  Mostly average I guess.

The nose releases some orange citrus with a solid backbone of caramel malt.  A nice aroma of lightly toasted breads and biscuity scents contributed a roundness that I liked.  I even thought that I detected a little bit of honey in there.  All in all, not bad.

The flavor brought forth a slightly sweet touch of orange citrus, which had a low to medium bittering profile. Again, some toasted breads and light caramel along with some clean grains and cracker type malts kept things calm and balanced.  Overall, the flavor tended to be a bit simple, yet it was good and harmonious.  Sometimes simple is a good thing.

The mouthfeel was medium bodied.  Quite smooth and slick with a semi-dry and crisp finish.  The carbonation was of medium strength and an “ok” amount of flavor was left behind on the palate after each sip.

Well, this beer was solid for sure.  It’s definitely not a “hop bomb” like American IPA’s, but it maintained enough bite and punch to make for a suitable drink for those hop lovers.  The drinkability was excellent and I don’t think that it would be any problem to put a few of these down during a session at any point throughout the year.  I’d drink it again that’s for sure.  I’d also suggest picking it up if you see it on the shelf somewhere.  It’s been a while since I last had a beer from Fullers, but with the satisfaction that I received from the Begal Lancer I may have to revisit some of their other products.

Posted by Beer Apprentice on July 31, 2013 in Country: England, Fullers

I’ve been fortunate enough to have the opportunity to try several of these in the past and all have been very good.  I’m really excited about trying this one as well.

From the website, fullers.co.uk, we find this enticing description of these brews.

Vintage Ale is a truly distinguished bottle-conditioned ale, crafted by Fuller’s Head Brewer, John Keeling.  Each vintage is a blend of that years’ finest malt and hops, and of course our unique yeast, creating a unique limited edition brew.

Bottle conditioning means that a little yeast is left in the bottle after bottling, which will mature slowly over time like a fine wine or whiskey – well beyond the best before date that we are obliged to state.  Here at Fuller’s, we recently opened (in the interest of research, of course) a few bottles of old Vintages:  they tasted better than ever so stock up now and you’ll be glad you did in years to come! 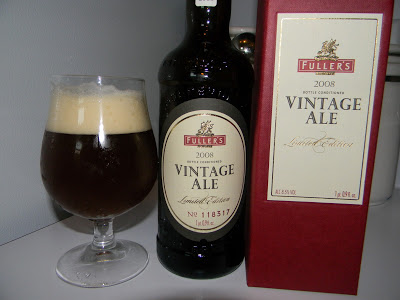 It poured a murky, burgundy/brown color with a nicely sized, off white head.  It was semi-creamy and soft.  It had a decent retention time and it left behind some adequate lacing as well.  A slight appearance of some alcohol legs were left on the glass when tilted too.

The aroma presented a solid dose of caramel and toffee sweetness.  Hints of cranberry, ripe apple and raisins.  Very yeasty also.  As it warmed, it kind of smelled like freshly baked raisin bread with brown sugar sprinkled on top.  Nice.

The taste burst through with that sugary caramel malt sweetness.  Savors of doughy bread and yeast mixed with raisins and dates.  A minor taste of alcohol, but it quickly dissipated after a few sips.  I found it to be well balanced, harmonized and suitable.  Not too strong either.  Just about right.

The mouthfeel was medium bodied.  Dry, chewy, and incredibly smooth.  The carbonation was low to medium/low.  No discernible warmth was felt, however a decent amount of flavor was left behind after each taste.

Well, this brew is very good in my opinion.  Actually, all of these Vintage Ales are very good.  They are super easy to drink, have plenty of flavor and age gracefully.  I’d highly recommend trying some if you have the opportunity.  I’m very happy to be able to obtain these with relative ease.  I try to pick one up every so often to put back for a rainy day.  I think they are very underrated and should be treated with the utmost respect by even the most advanced craft beer aficionado.  Even though this version didn’t seem to be as complex as some of the others I’ve tried I would still say give the Fullers 2008 Limited Edition Vintage Ale a try and see what you think.

Posted by Beer Apprentice on July 30, 2012 in Country: England, Fullers

I’ve had the opportunity to try a few of these before and they have been very enjoyable and tasty beers.  I’m sure this one will be as well.  This particular vintage is also the tenth anniversary series.

Vintage Ale is a truly distinguished bottle-conditioned ale, crafted by Fuller’s Head Brewer, John Keeling.  Each vintage is a blend of that years’ finest malt and hops, and of course our unique yeast, creating a unique limited edition brew.

Bottle conditioning means that a little yeast is left in the bottle after bottling, which will mature slowly over time like a fine wine or whiskey – well beyond the best before date that we are obliged to state.  Here at Fuller’s, we recently opened (in the interest of research, of course) a few bottles of old Vintages:  they tasted better than ever so stock up now and you’ll be glad you did in years to come! 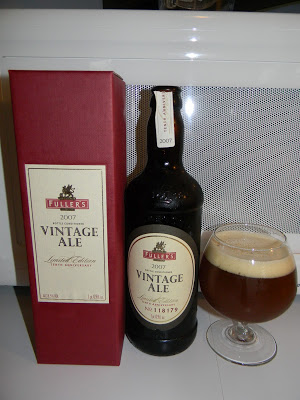 The beer poured a murky brown to caramel color.  It had a light tan head that was of suitable size.  It was soft, smooth and creamy.  The retention time was excellent and the lacing was quite satisfactory.  While sipping though, it dissipated to nearly nothing, but I did start to notice the clear alcohol rings on the sides of the snifter.  All in all, a very nice looking beer.

At first this brew smelled of sweet grapes and prunes.  Very similar to grape juice or prune juice.  After a few moments however, it started to reveal wonderful aromas of caramel and substantial amounts of yeast and lightly toasted breads.  A very relaxed amount of woodiness or oak was noticed too and it seemed to fit the bouquet very nicely.  Like the others vintages I’ve tried, this one smelled really good.

The dark fruits subsided even more in the taste.  They were still there, but the maltiness really stepped it up a notch and became the star of the show.  The caramel became more vibrant and the yeast more refined.  The breadiness revealed a very pleasant “toastiness” that really gave the flavor a kind of “baked fruit loaf” type of flavor.  The sweetness was spot on and not cloying in the least.  The “woodiness” was quite restrained, but still duly noted.  Only a very light alcohol note was found too.  This brew really did have an outstanding taste and it only got better with each sip.

The mouthfeel was a solid medium bodied.  It was dry, super smooth, slightly chewy and very creamy.  The carbonation was still excellent considering the age of the beer.  A gentle warmth was felt at the very back end and a sturdy dose of flavor was left behind after the sip.

Well, this was another great beer by Fullers.  I love these Vintage Ales.  They are each a tad different and unique while remaining considerably similar.  The balance and the smooth, round profile is what really stood out with this one.  It was a joy to sip.  I use the word “sip” lightly because the drinkability was superb.  I tried not to rush through it, but I found myself taking bigger and bigger gulps as I went along.  As with prior reviews of these beer that I’ve done, I would highly recommend picking up any vintage year and seeing how you like it.  I doubt that you will be disappointed.

Posted by Beer Apprentice on March 22, 2012 in Country: England, Fullers