Before I even get to the review I’m going to go ahead and state that this is a great brew.  One that I’ve had a few times before, but have never given a proper review.

Let’s see if we can find any info on this beer from the website, trappistwestmalle.be.

Westmalle Tripel is a clear, golden yellow Trappist beer that undergoes a secondary fermentation in the bottle (9,5% alcohol). It is a complex beer with a fruity aroma and a nice nuanced hop scent. It is soft and creamy in the mouth, with a bitter touch carried by the fruity aroma. An exceptional beer, with a great deal of finesse and elegance. And with a splendid long aftertaste.

Now we are talking!!! 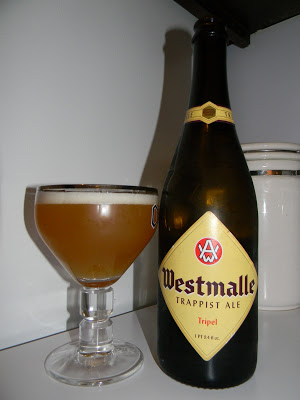 The Tripel began as a cloudy, orange/dull yellow color that cleared up nicely as the brew started to warm.  The head was white, semi-creamy and soft.  It had a very nice size with decent retention and some adequate lacing left behind after each sip.

The aroma revealed hints of white grapes and citrusy lemons.  Only a mild touch of sourness was detected along with a more revealing hint of bread and Belgian yeast.  A worthwhile pepper spice added some more complexity along with some herbs and sugars.  A very, very nice nose on this beer.

The taste was both a sweet sugar and sour mix.  Sweet, fruity grapes with a slightly tart lemon savor.  Supplementary white wine characteristics with splashes of alcohol mingled super well with the peppery spice.  The flavor had a facet similar to a well made Pale Ale.  A slight bit of hoppiness with a sturdy punch of bitterness.  As the brew warmed, the yeast and breadiness really started to come forward and complete this well rounded, evenly balanced and complex taste.  Man, this thing tasted nice.

The mouthfeel was medium, crisp, snappy, refreshing (nearly thirst quenching) and very dry with a minute sharpness.  The carbonation was spot on.  A soothing and smooth warmth was felt as I swallowed, which in turn left a suitable amount of flavor behind on the palate.

What can I say?  This is a great beer.  It’s a certified classic in my opinion.  One that should be enjoyed several times throughout the year.  The drinkability is rather high considering the above average ABV, however this brew could also be enjoyed as a sipper on most occasions.  The Westmalle Tripel is most definitely a brew that I will continue to pick up on a regular basis.  If you have not tried it, I would highly recommend that you do so.  I don’t think that you will be disappointed.

What do you guys think of the Westmalle Trappist Ale Tripel????  Do you like it????

Please feel free to leave a comment or let me know via Twitter (@BeerApprentice & @shrews824) or Google+ (Scott Shrewsberry).

Thanks for reading everyone.  I really appreciate it.  Until next time.

Posted by Beer Apprentice on November 30, 2011 in Country: Belgium, Westmalle

This beer has long been a classic in the craft beer world and I figured it was about time to give it a proper review.

Let’s see if we can find some information about this beer on the website, trappistwestmalle.be.

Westmalle Dubbel is a dark, reddish-brown Trappist beer with a secondary fermentation in the bottle.  The creamy head has the fragrance of special malt and leaves an attractive lace pattern in the glass.  The flavour is rich and complex, herby and fruity with a fresh-bitter finish.  It is a balanced quality beer with a soft feel in the mouth and a long, dry aftertaste.  The Dubbel contains 7% alcohol.

Sounds good to me.

It poured a very deep burgundy to brown color with a light tan, tight, small head.  It was somewhat creamy and smooth, however the retention time was only average.  The lacing seemed to really cling to the sides of the tulip glass making for a very appealing and enticing looking beer.

The aroma was a beautiful and delectable combination of dark fruit (figs, dates, plums and raisins) along with subtle hints of banana and spices of nutmeg.  Mild, but noticeable, tones of chocolate (chocolate covered raisins) added some very pleasing sugary sweetness to the overall aroma.  Further hints of yeast and sour dough goodness only reiterated my eagerness to take a sip.  The bouquet was very well balanced and delightful.

The taste continued the theme of dark fruits and chocolate.  More of the Belgian yeast, spices of nutmeg and cloves sat deep in the taste to hold true to the style.  Savors of toasted grain and alcohol added a smidgen of warmth and pulled some of the sweetness off the top.  The bitterness was duly noted, although I never thought that it was a defining factor to the profile.  The taste, like the aroma, was well balanced and good, however I didn’t think it was quite as rich and robust as some of the other Dubbels I’ve had in the past.  Oh well, it still tasted very good.

The mouthfeel was medium to slightly medium/thin.  It was very soft, smooth and only somewhat dry.  This thing is nearly crisp and refreshing.  It left a light warming effect after the swallow, which coincided with an average amount of flavor remaining on the palate.

Well, we have another very good beer right here.  It’s unbelievably easy to drink.  It has an outstanding aroma and a very good taste.  The mouthfeel was a little weak, but that’s quite alright.  It didn’t deter too much from the overall enjoyment of this brew.  The Westmalle Trappist Dubbel is a certified classic and it’s one to try if for some reason you have not sampled it yet.  I do believe that I could drink this at most anytime of the year and at anytime during the day.  If you have tried it…. be sure to leave a comment and let me know what you thought of this Dubbel.

Thanks for reading and commenting guys.  Until next time.

Posted by Beer Apprentice on October 16, 2011 in Country: Belgium, Westmalle