What’s up guys?  Everything going alright?  I hope so.  Well, for today’s craft beer review I’m going to be trying a beer from the Brouwerij Drie Fonteinen out of Beersel, Belgium called Oude Kriek.

I personally think Mr. Armand Debelder is a genius, so to have the opportunity to try the Oude Kriek is very, very exciting to say the least.

I found this short description of the brew on the website, 3fonteinen.be.

Oude Kriek 3 Fountains caused by ripening cherries (both the pulp and the seeds) in young Lambic. This process takes between 6 to 8 months after bottling the beer matures for at least four months in a warm room where the spontaneous fermentation occurs in the bottle.

It poured a deep reddish to cranberry juice color.  A light pink head with an ok size was formed from a very gentle pour.  It was somewhat sudsy and fizzy.  The retention time was slight and the lacing lacked a touch as well.

The bouquet was remarkable.  Beautifully soured cherries blended near perfectly with tones of oak and earth. As I studied the fruitiness a bit more I also began to pick up on hints of strawberry and raspberry. Very nice.  A tiny bit of acidity was found, however a very well balanced funk helped pull it all together.  Wow. This had one of the better fragrances that I’ve smelled in quite some time.

The flavor was really nice too.  A manageable sourness of cherries and ripe strawberries started it off.  A kiss of vinegar, light funkiness and a medium strength tartness quickly followed.  The oak fell inline at the back end and it seemed to help smooth it out.  A subtle savor of yeast was buried deep within the taste to add just a dab more complexity.

The mouthfeel was medium bodied.  Slightly sharp and crisp with a lower carbonation.  It became way more smooth as I went along and as I adjusted.  A lot of flavor was left behind covering the palate after each sip too.

Yeah, I thought this was a great beer to put it mildly.  The aroma was “world class” in my opinion.  The flavor was great, but it didn’t release the over the top sourness or tartness that some other Krieks have, yet enough was there to illicit a proper showing.  I would love to pick this up again for sure and I’d highly recommend you guys giving the Drie Fonteinen Oude Kriek a try if you happen to run across it and if you like Lambics.  Be sure to let me know your opinion of it as well.

13 Jan
How’s it going folks?  Thanks for checking back in on another craft beer review.  For today’s tasting session I’m going to be trying the Drie Fonteinen Oude Geuze Golden Blend (2011) produced by the Brouwerij Drie Fonteinen located in Beersel, Belgium.

Without a doubt, Drie Fonteinen products are some of the best in the world, so to get the opportunity to try the Golden Blend version of the Oude Geuze is really a treat.

I would encourage you to check out the website, 3fonteinen.be, for some insightful information of their products, although I couldn’t find anything specific about the Golden Blend.  I did find this little snippet on ratebeer.com however.

The exact mixture is only known by the master-blender Armand himself.

The name “Golden Blend” is not far away from the truth, in fact, the 4 years of maturation in oak-wooden barrels is making this particular Lambic very expensive.

Due to the “evaporation” through the barrels, only a small percentage of the lambic is left over after 4 years of maturing. 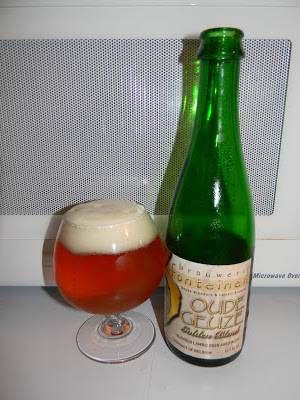 It poured a clear, pristine, deep golden to orange color.  A wonderfully sized white head was formed from a fairly easy pour.  The texture was fizzy, soapy, fluffy and kind of rocky.  The retention time was excellent and it left behind some attractive, patchy lacing.  I could see a good deal of bubbles streaming to the top from the bottom.  It did become a little bit hazy as I poured in the “bugs” toward the end.

The aroma was musty, woody, oaky, funky and sour.  Awesome.  It developed hints of lemon citrus, a bit of grape and soured green apple.  Some vinegar and acidity were noticed as well as some freshly cut hay, earthy goodness and a light “tree bark” kind of fragrance. This brew smelled great and very well balanced.

The flavor was beautifully tart, sour and funky.  Lip puckering lemon citrus and apple followed by a superbly well blended woody oak, which helped tone down and mellow the sourness.  I gathered more of the hay, barnyard funk and earthiness as it warmed and began to settle.  It had an almost peppery spice kind of savor too.  Very nice.

The mouthfeel was medium bodied.  Very dry, sharp and bitey.  It did seem to become a little more smooth as the palate adjusted.  A very lively and strong carbonation was prevalent and a little bit of warmth and heat was discovered.  An outstanding dose of flavor was left behind long after each sip.

What a spectacular beer.  Possibly the best Geuze I’ve had to date.  The transition from start to finish was very intriguing and very well received.  The drinkability was exceptional and I believe I could drink it at anytime of year.  It’s very complex, but that in no way deters from the enjoyment of just “kicking back” with it on a lazy afternoon. I’d highly recommend picking up the Drie Fonteinen Oude Geuze Golden Blend if you run across one in the back room of the bottle shop.  If you appreciate Geuze’s, I doubt that you will be disappointed with this one.

04 May
Hello everyone.  For today’s craft beer review I’m going to be trying the Drie (3) Fonteinen Oude Geuze produced by the Brouwerij Drie Fonteinen located in Beersel, Belgium.

This will be my first ever tasting of a Drie Fonteinen and, needless to say, I’ve very excited about it.

From the website, 3fonteinen.be, we find this description of the Oude Geuze.

A true Geuze – a blend of 1, 2, and 3 year-old lambic.  Unfiltered and unpasteurized, and aged in the bottle for at least a year after blending.  Refermentation in the bottle gives this Geuze its famous champagne-like spritziness.  The lambic that goes into it is brewed only with 60% barley malt, 40% unmalted wheat, aged hops, and water, spontaneously fermented by wild yeasts, and matured in oak casks.

Very enticing description there I must say.

It poured a hazy, pale amber to golden color.  The white head was decently sized, but it was kind of soapy and fizzy.  The retention time was a bit meek, but the lacing looked fairly good though.  Not a bad looking beer, but not quite the best I’ve ever seen either.

The nose distributed hints of ripe green apple and lemon citrus combined with wonderfully balanced zips of wet hay, lemon grass and some of that “barnyard funk” that we all love.  The funk wasn’t overpowering or vulgar, but rather fitting and welcomed.  It did smell a touch sour, but like the funk, it wasn’t obtrusive or offensive.  Deep within the aroma the oakiness began to protrude along with a slight musty characteristic that totally set this bouquet off.  A very, very nice fragrance on this beer I thought.

The taste was wonderful.  Extremely well balanced savors of lemon citrus and green apple combined with a good sting of sourness and a tickle of acidic vinegar.  The tartness was easily bearable and the woody/oaky characteristics pulled through on the back end, which in turn, gave it a nice earthy/herbal savor.  The funk anchored and completed this suitable and tasty brew.

The mouthfeel was medium bodied and very dry.  It was very bitey and snappy at first, but it smoothed every so slightly as I went along.  The carbonation seemed ok and tons of residue was left covering the palate long after each sip.

I’ll tell ya.  I thought this was a very nice beer.  Definitely worth a try if you have yet to do so.  It has quite a bit to decipher, however it doesn’t become so complicated that it can’t be enjoyed or appreciated by someone exploring the style for the first time.  The drinkability was rather good as well.  I would love to pick this up again sometime in the near future.  I think that it could be enjoyed year round, although I would find it most satisfying during the Spring time.  So, give the Drie Fonteinen Oude Geuze a test drive if you can find it.  I doubt that you will be disappointed.

Thanks y’all.  I hope that you folks are still enjoying the reviews.  Don’t be afraid to comment either.  I would love to hear some feedback.

Posted by Beer Apprentice on May 4, 2012 in Country: Belgium, Drie Fonteinen