This is a brew that I, like most, try to pick up every year just to see how it stacks up to the other Oktoberfests on the market.

Brewed with five varieties of malted barley for a big, rich flavor. 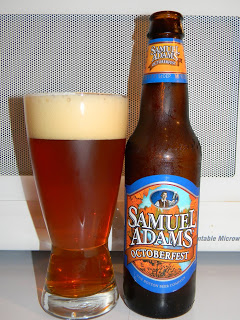 It poured a clear, amber/copper/rust color with some burnt orange highlights circling around the bottom of the glass.  The head was a light cream color of good size with average retention and some fair lacing left behind.  The crown was smooth, soft and sort of creamy.

The nose started with some jolts of caramel sweetness.  Subtle spices of nutmeg were intermingled with some earthy hops and tones of fresh grain, which were enhanced even further by a fragrance of dried, crumbled leaves.  It seemed to be balanced very well, however it wasn’t anything out of the ordinary for the style.

The taste revealed slightly toasted bread crumbs along with more of the sweet caramel malt.  A moderate graininess joined the party and the spices gave a slight sting and really held their own.  In fact, the spices kind of became the defining factor after the brew warmed considerabley.  Again, fairly well balanced and decent.

The mouthfeel was medium, crisp, smooth and dry.  A decent bit of flavor was left behind, which created a somewhat chewy feel.  Not bad.

Overall, this beer is pretty good in my opinion.  It’s a mostly straight forward Marzen.  It’s not anything too crazy or misinterpreted.  Sometimes I like a brew that’s a little more to the point like this one is.  The Samuel Adams Octoberfest is easily drinkable, very sessionable and completely fits the mood of the season.  I could picture myself sitting around the campfire on a cool, crisp, Fall evening enjoying several of these.  If you haven’t had this years version of the Samuel Adams Octoberfest yet, pick up a bottle or two.  The recipe hasn’t changed much (if at all) and it should match up well against the plethora of other Fall seasonals out there.

Thanks for reading everyone.  Have a great day.