It’s been forever since I last had a Chimay of any kind. Of the beers they produce, this particular brew was always good, so I figured I’d give it a more formal review.

Let’s see what the website, chimay.com, has to say about the Cinq Cents.

The Chimay Triple, last-born of the Abbey, is labelled “Cinq Cents” on the 750 ml bottle. Of a golden colour, the Trappist beer combines sweet and bitter in a rare balance. The beer’s aroma felt in the mouth comes from the hops’ perfumes: above all, they are fruity touches of Muscat grapes and raisins, even ripe apples. This traditional Belgian beer is best savoured fresh at a temperature of from 6 to 8°C. 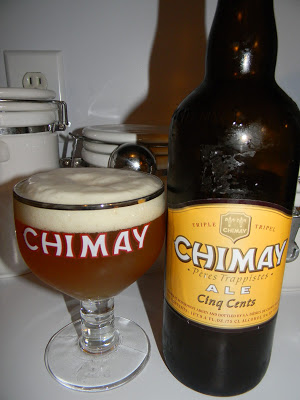 This brew poured a very hazy orange color with some yellow highlights around the edges of the chalice.  The crown was very white in appearance and it was of good standing.  It was kind of fizzy, but soft.  The retention time was more than suitable and the lacing was above average.  The head settled to a smooth, almost creamy film that lasted nearly the duration of the drink.

The nose brought forth a very nice dose of yeast and bready goodness on the initial whiff.  I got quite a bit of spice too.  Hints of pepper and clove really start to stand out as the brew opened up a bit.  Some fruity hints of apple and white grapes along with a very mild tone of banana gave it a bit more complexity, not to mention a touch of sweetness.  Very well balanced and harmonized in my opinion.

In the taste, the clove was the most distinguished aspect upon the first sip or two.  The pepper seemed more subtle, however still noticed.  The fruits came in after a while, but they were quite a bit more relaxed also.  I could still determine the grapes and apples, but the banana was very subdued.  A touch of alcohol was noticed too, however once the bready and yeasty components started to make themselves known, they really “tied the room together”.  Overall, very tasty and even throughout.

The mouthfeel was of medium strength.  It was smooth, dry, crisp and refreshing.  The carbonation was nearly perfect.  A small amount of warmth was felt from both the pepper and the alcohol and the palate was left with plenty of flavor to ponder long after each gulp.

Man, this is still a really nice beer.  I’m glad I picked up a bottle.  All around, it’s more than solid.  It’s very easy to drink and it has more than enough character to satisfy any craft beer drinker.  I doubt I wait as long as I did this time to pick it up again.  In fact, I might start to make a point of picking up a bottle every so often.  The drinkability was excellent and with the warmer days right around the corner, I think the Chimay Cinq Cents would fit the mood perfectly.  Have you guys every tried anything from Chimay?  What have you had?  Did you like it?  Be sure to leave a comment if you wish and tell me all about it.

Thanks for reading everyone.  It’s most appreciated.

Posted by Beer Apprentice on April 2, 2012 in Chimay, Country: Belgium

← Review of Pliny The Elder
Review of Schlafly Pale Ale →