03 Aug
Hi guys.  For today’s craft beer review I thought I would share with you in my experience of tasting the Victory Otto produced by the Victory Brewing Company located in Downingtown, Pennsylvania.

A big thanks to Ryan Hudak (insearchofbeer.org) for sending me this a while back.  I’m just now getting around to trying it.  I don’t know what has taken me so long.  Honestly, I kind of forgot that I had it.  It was stuffed in a box that I had stored away with some other “big” beers.

Well, anyway.  Let’s get to the website, victorybeer.com, and see what we can find out about this brew.

In 1987, when we arrived in Bamberg, Germany for the first time, St. Otto was not there to greet two thirsty travelers in a rented Fiat. He’d been dead for 848 years but we were alive, and our recent visit to the Belgian brewery of Orval only fanned the flames of our desire for fermented pleasures. the smoked malt(’rauch’)beers of this lovely town where St. Otto was once bishop were our siren song, luring us into deep, exotic flavors that we never before imagined in beer. Three decades later we wondered what smoked malt might add to a Belgian-style dubbel ale. Here it is, an Otto revival of sorts. We hope it helps rejuvenate some of our brain cells that were martyred in Bamberg so long ago.

Alrighty then.  Let’s give it a go. 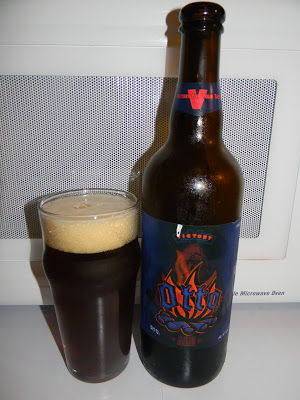 It poured a brown to deep burgundy color with a small amount of burnt orange highlights around the bottom of the nonic glass.  The head was off white and kind of soapy and fizzy.  I was expecting it to be a bit smoother and creamier to be honest.  Oh well.  The size was still ok and lacing didn’t look too bad.

The aroma brought forth a solid hint of smoke along with toasted bread tones and country ham.  As the brew warmed a bit it started to reveal a smidgen of sweetness as well as a dark fruity fig or something.  Also, a light touch of spice added just a tad bit more complexity.  Not bad at all.  I liked the bouquet quite well.

The taste released further relishes of smoked meats.  Similar to bacon and ham.  I also discovered some toasted grains, breads and yeast.  The fruity fig does come through a little bit at the back end as it warmed, however it was actually mostly the smokey/woody character.  That was fine with me though because I enjoyed that aspect very much.   I didn’t really discover any spice or anything.  Hmm.  Maybe it was just hidden really well.

The mouthfeel was medium bodied.  Smooth, dry and kind of chewy.  The carbonation seemed a touch low, although it did leave an ok amount of flavor behind after each swallow.

All around, I thought this was a pretty good beer.  I really liked the combination of the “smoked” style intermingled with the dark, fruity, bready Dubbel style.  Very interesting.  I had yet to try a beer like that.  I don’t know that I would go so far as to say that this is the greatest “smoked” beer on the market, but it’s still pretty darn tasty and I would have no problem trying it again.  You should give the Victory Otto a sample as well if you happen to see it.  The drinkability is decent and it has enough character to keep a person interested for the duration.

Posted by Beer Apprentice on August 3, 2012 in Country: USA, Victory